cupcake hats and the encyclopedia 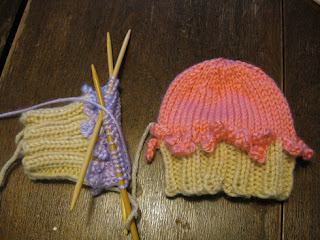 I've had the pattern for the cupcake hat in my Ravelry queue since I made Leif's pineapple hat. I don't know whether or not I actually planned on sticking a cupcake on his head, or if I was going to scale it up for Alex, or what I was thinking. As a preemie-sized hat, though, it's adorable!

Wish I could say the same for the Baby Bunny Newborn or Preemie Hat. I followed the instructions as written. If I was going to try it again I'd knit it in the round and make the ears longer, but I think I'm about ready to give up on the bunny hats. Sewing on separate ears is not making me a happy knitter. 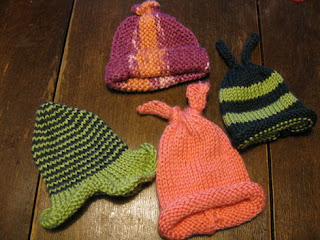 I'm slowly working my way through The Know-It-All: One Man's Humble Quest to Become the Smartest Person in the World

by A. J. Jacobs. I picked up this one after reading one of his other titles, My Life as an Experiment: One Man's Humble Quest to Improve Himself by Living as a Woman, Becoming George Washington, Telling No Lies, and Other Radical Tests

I flew through the first book. This second one is taking longer because I have so many other things going on right now. And, like the encyclopedia, it's full of good stopping points. 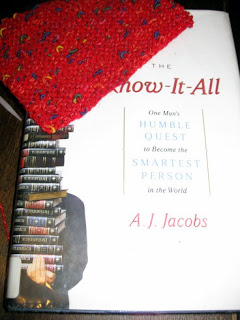 Does every bookworm think of reading through the entire encyclopedia? I know I tried it once. Can't remember how old I was, but I didn't make it very far before moving on to more interesting things. Reading this book almost tempts me to try it again.

So cute Michelle! I am going to pass this pattern on to my friend who is making baby hats too.

Too cute.
I'm thinking an adult sized one would be a good joke.
Enjoy your book. (can't say I ever tried reading the encyclopedia )

Cute hats again Michelle...It appears you are in knitting mode.