{I've Been Reading} A Side of Murder

A Side of Murder by Amy Pershing
The first Cape Cod Foodie Mystery opens with a huge infodump, telling the reader all about the protagonist's childhood home and her friends and how crushed shell driveways are made... and it immediately turned me off. I didn't care about any of that, but as soon as the book got to the present and what was actually happening now I warmed up to Samantha Barnes and her surroundings and friends. Now I'm wishing this was an established series so that I could jump right into the next book. Samantha had left Cape Cod years ago to pursue her dreams of becoming a professional chef. It was all going well until that last blowup with her now ex-husband went viral on YouTube. Now she's inherited a dilapidated house and a huge puppy and is writing restaurant reviews while she tries to figure out what comes next. What happens is that she discovers a dead body. I love the characters, the setting, the complex mystery, the chemistry between Samantha and her first love who is now the harbormaster. And I absolutely can't wait for the next book.

Flowers of Darkness by Tatiana de Rosnay
I thought this one was right up my alley -- a thriller about a writer moving into an apartment in a high tech apartment building. It's the type of book I gravitate towards but this one just felt slow. And confusing. It's set in Paris in the near future and is deliberately vague about things like "the attack" until chapters later when it finally reveals what was attacked, but not by who. There are no more bees, or gardens....I guess due to global warming? But that's all a vague background to the events of Clarissa's life. Her too-good-to-be-true apartment is starting to make her uncomfortable. Maybe if I was more familiar with the works of Virginia Woolf or had ever heard of Romain Gary I would have appreciated the book more. Instead, I'm left wondering why someone would knowingly move into an apartment filled with cameras and then decide that being watched is sinister.

Posession by Katie Lowe
Hannah remembers almost nothing about the night her husband was murdered. Ten years have passed. The killer is in jail. She's built a new life for herself and things are going well...until a true crime podcast begins covering the case, questioning whether the man convicted of her husband's murder did it or maybe Hannah herself was responsible.
There's a lot going on in Hannah's life and the book jumps back and forth from before her husband's death to the present day. She visits the former asylum where her own grandmother spent time, works at an in-patient treatment facility for young women with eating disorders, sees visions of her dead husband critiquing her actions, and listens to each new episode of the podcast with her new lover and her now teenage daughter. As public opinion against her worsens, she steadily unravels.
It took me a while to get through this one, although my interest picked up once I thought I knew what turns the plot was taking. (My guesses were wrong.)
Disclosure -- The publishers provided me with advance review copies. This post contains affiliate links.
Posted by Michelle at 4:00 AM No comments:

Wrecked by Mary Anna Evans
Faye Longchamp and her husband Joe are doing  everything they can to help their friends and neighbors recover from the latest hurricane. Their own island home was mostly spared, but there are lots of people who weren't as lucky and as long as the two are able they're spending their days checking on people and bringing them water and needed supplies. Joe has been using his new drone to capture pictures of the damage and one of the images shows something underwater that Faye hopes might be a shipwreck that was exposed by the storm. When the body of her good friend, Captain Edward Eubank, is discovered in the marina wearing scuba gear and tanks it makes no sense. None of his friends have heard him talk about diving, so what happened to him?
I've only managed to read three books from this series so far, but I love spending time with Faye. There's a lot going on in this book and even though I know I'm missing some important details that I want to catch up on later, I never feel lost. The characters and their lives are wonderfully detailed and Mary Anna Evans really makes me care about the people she's created.
Disclosure -- The publishers provided me with advance review copies. This post contains affiliate links.
Posted by Michelle at 4:00 AM No comments:

his cross stitch design makes me happy. I love the feeling of sitting up late at night and being so excited by a book that I can't bring myself to put it down. More often than not, especially if it's late at night, that means I'm reading on my Kindle or the Kindle app on my phone because when I'm too sleepy to read another word, all I have to do is click a button. 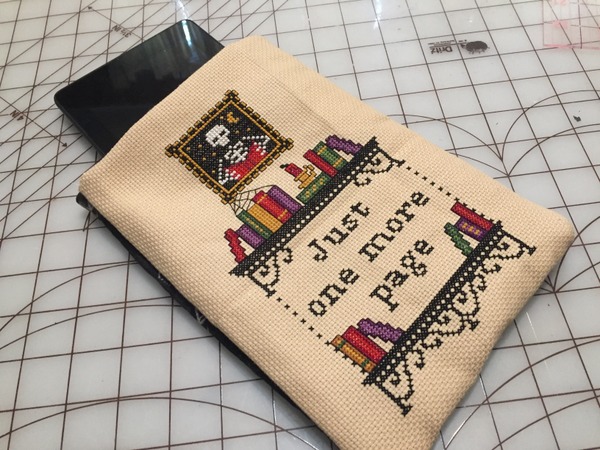 The pattern is Just One More Page and it's a free download from Night Spirit Studio, the same designer who did the Self Isolating Bat and Plague Nurse that I stitched last year. I've had it printed out for a while, but probably wouldn't have stitched it yet if my friend Amy hadn't suggested a stitch along...and once it was stitched it was so pretty that I decided I could really use another Kindle sleeve.

There's a video if you want to see how I did the finishing...

{I've Been Reading} The Night Swim

The Night Swim by Megan Goldin
For the third season of her true crime podcast, Rachel Grall chose a story that she knew would generate conversation and conflict. It's a rape case and the trial is still ongoing. She's living out of a hotel room, gathering information and condensing it into episodes she hopes will entertain her listeners. One of those listeners has written to her twice and started leaving notes on her car, desperate to get Rachel's attention.
Enjoyed isn't the word for how I felt about this book. I was fascinated, and anxious to find out what had actually happened. Parts of the book are absolutely heartbreaking and I found myself wishing I had the power to make things better for the fictional characters. Rape plays a huge role in the plot and it's absolutely brutal...not the description of the act itself as much as the effect it has on the victim.  If that's something you prefer to avoid reading about, you might want to skip this one.

The Project by Courtney Summers

Lo Denham lost her parents, and almost her own life, to a tragic car accident. She lost her older sister, Bea, to The Unity Project, a religious group that's known for its public outreach and good works. Now, Lo is determined to reunite with Bea and find out why her sister abandoned her after the accident. As intrigued as I am by cults, I couldn't get into this one. The plot builds slowly and some questions are never answered.

Posted by Michelle at 5:51 PM No comments:

Let's Make Baby Quilts Linky Party Rules:  Link directly to your post or specific Flickr photo. Your post can be about a baby quilt that's finished, or in progress, or you can be writing about what you have planned,  as long as it's about baby quilts. You're welcome to link to baby quilt posts that aren't brand new, but please don't submit the same post or picture more than once. I'd love it if you linked back to my site, either with a text link or the Let's Make Baby Quilts! button.

You are invited to the Inlinkz link party!