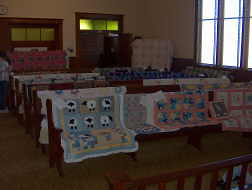 Today it was the quilt show in Halsey. The quilts were draped across the church pews, which was neat. But I'm not sure it was worth the $3 to get in. We saw more quilts hanging in some of the shops we visited earlier this week. 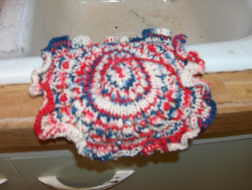 I made this without a pattern, starting with the instructions for a round shawl from the Yarn Harlot's new book and then doing my own thing. It doesn't lay flat, but I'm hoping that's because I miscounted my rows. I really really really want to knit myself a pi shawl, and I've got a couple of ideas for round baby blankets that I'd like to try. One of these days. When I've got time. 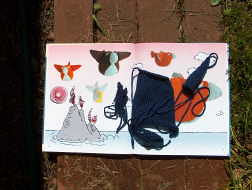 And I got a couple more pieces of Birdie done. He'd probably be a quick project if I wasn't living in new mommy time. For me, everything is taking forever and ever and ever...

I don't like any of my WIPs (except maybe the pink socks), and it's extra frustrating because most of them are things I should be able to finish, or at least get back on track, in a couple hours of knitting. Wish I had a couple of hours to spend on it.
Posted by Michelle at 11:17 PM No comments:

We've been on a Quilter's Safari

ten quilt shops in two days with four kids....really cute T-shirts...enough neat eye candy to make my brain numb...gorgeous fabric that I can't wait to make into a quilt...gorgeous fabric I'm not sure exactly what to do with...cheap sock yarn...lots of new ideas for future projects...

I'm exhausted. The kids must be just as tired because they've all been asleep long enough for me to cast on a new dishcloth and get a few inches done.
Posted by Michelle at 11:09 PM No comments:

My babies won't nap. They're sneaky and get their sleep in the car while we're running errands.

But I did manage a few rounds of the pineapple hat last night with all four of the kids crawling on me.
Posted by Michelle at 4:45 PM No comments:

Sometimes a long nap or a good movie can work wonders. Yesterday while the littlest was napping and the big three were watching King Kong for the second time (gotta go out and buy us that one, because even though I think the villagers are the creepiest thing I've seen in a long time, the kids think it's the best thing since Jurassic Park), I plugged in the sewing machine and iron and pulled out my churn dash squares. I was hoping to get one or two of them assembled before Leif woke up.

Do you see this?! 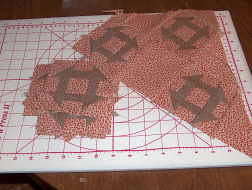 This is all nine completed blocks AND some of the setting squares --- and the baby was still sleeping when I quit for the day because the rest of the family was ready to watch The Chronicles of Narnia. I'm hoping for another long nap this afternoon so I can get the rest of it together. Then I'll have to come up with something for the borders, which may involve a trip to Joann's.

I'm not participating in Use What You Have Month, even though it's a fantastic idea. I've got some money to spend and there are good sales going on at the same time and I just spent almost a year trying to use what I had and feeling guilty every time I did buy yarn or fabric. So this month I'm happily adding to what I have while I can. Any other month, I would've loved this. 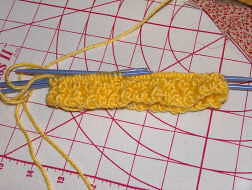 I did cast on for the pineapple hat and manage four rounds before stopping for the night. I don't like purling three together once, let alone every fourth stitch! I've avoided stitch patterns in the past because I was intimidated by the instruction to "k1 p1 k1 into the same stitch," but that turned out to be the easy part. It's the purling that's hard. I'm going to keep plodding away and see if it gets any easier.
Posted by Michelle at 1:45 PM No comments:

I was up until 2am working on projects. It would've all worked out very well except for stupid daylight savings time which meant that 2am was really 3am, and by the time you add in waking up to feed the baby, I don't even want to think about how little sleep I'm running on.

The second Julia Hat, this one in Sock it to Me! Esprit, is done. I love the color and texture, but doesn't fit my 7 1/2 pound baby, so there's no way it's going to fit the little guy I was knitting it for. And since it didn't photograph at all well, I'm not going to waste bandwidth on a blurry reddish blob.

Half of the evil awful Walmart Mainstays yarn has finally been transformed into something kind of neat. I bought 2 skeins after someone on one of the lists recommended it, thinking I'd try a baby blanket. This stuff is so scratchy and nasty even I can't convince myself to knit with it. I would've taken it back to the store, but the receipt got thrown out so I buried it in a dark corner of my stash until the hula skirt pattern in New Knits on the Block got me thinking that it could have a use after all. Instead of following the pattern, I made it up as I went along. At the time, that seemed easier than getting out the book. Start to finish, with breaks to hold the baby, it only took about two hours.

Tonight's plan is to cast on for the pineapple baby hat.
Posted by Michelle at 7:39 PM No comments:

It's flash your stash time again!

My sewing room is a total mess. This is how it looked after I spent some time straightening things out. It's been too cold up there to do more than dash in and find what I'm after or shove stuff in the door. But the weather's getting nicer, so when I can take the baby up without freezing his (or my) little toes off, I'll get things put away. 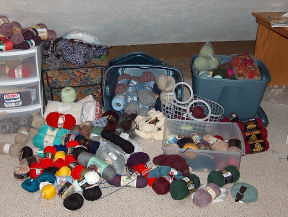 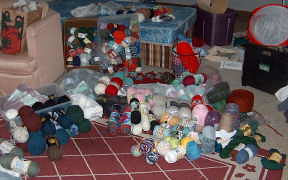 Doesn't look like much, does it? There's a ton of cheap acrylic, enough sock yarn for 35 pairs of adult socks (yeah, I bought more), and a few skeins of nicer stuff that are in a sad little pile because I stole the plastic drawers they were carefully stored in so that the quilting stuff in the dining room would look like it was put away. I'll get new drawers for the yarn one of these days.

I feel like I should go knit something...
Posted by Michelle at 12:27 PM 2 comments: