I bought a new book, Scrap Basket Surprises by Kim Brackett. I saw a preview on the author's blog earlier this year and ever since I've been waffling back and forth on whether I really needed to buy a copy or not, swinging between "I've absolutely got to have this book or I'll die!" to "Maybe if I wait long enough the library system might get a copy."

When I bought it at Joann's on Wednesday, I still hadn't made up my mind, but I had a fifty percent off coupon and I've learned my lesson the hard way. If you don't buy a book you're that intrigued by, the thing will go out of print and still be haunting you five or six years later.

In the first five days the book spent in my house, I completed all twenty five blocks for the Market Baskets pattern using mostly vintage fabric from my stash. And that wasn't even one of the patterns that I bought the book for!
Posted by Michelle at 2:53 PM No comments:

I'm making myself a quilt. 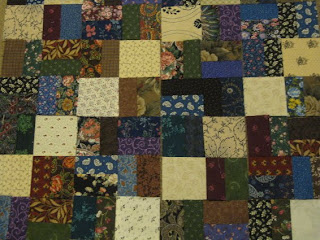 I know, I'm always making myself a quilt, but this one is special. And after an unplanned break from quilting, it's making me very happy to just plod away and piece bricks of fabric together into pairs, then together into bigger units.

After I gave away my rail fence quilt, which I thought long and hard about and was perfectly okay with, I started to miss it just a little. And I started to think that I could make it a fraternal twin (remember those log cabin quilts last Christmas?), but instead of making another rail fence it might be neater to try yet another Fun With Bricks

My plan was to use a bunch of the same fabrics that I used in my rail fence, but I don't think that actually happened. Instead, I used fabric that would've been in the rail fence if I'd had them in my stash when I made that quilt.

Last night, I finally had enough piecing done to lay it out and get an idea what this might look like.

It's going to be better than the rail fence. 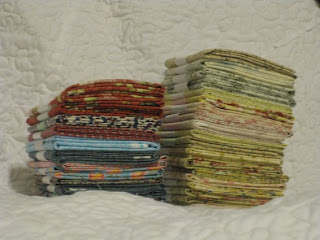 After that last trip to Joann's, I haven't been too optimistic about my fabric buying future. It seemed like cheap but nice fabric might be getting harder to come by.

Then my best friend and I stopped at a quilt shop this afternoon and the sign on the door read "clearance fat quarters, buy one get two free." Okay, $2.50 for three fat quarters -- better than the best Joann's sale. Except they were actually $1.25 for three fat quarters. AND they had a ton of different light prints that I can use in the next umpteen quilts I've got planned. I bought thirty fat quarters for $12.50.

My math skills aren't the greatest with a four year old helping me pick fabric, so it wasn't until a couple of hours later that the real numbers finally sunk in. $1.66 a yard for quilt shop fabric -- now I'm kicking myself for not buying more to make pieced backings for those umpteen quilts.

I'm not expecting to find a deal that good again, but it got me wondering -- are there good buys to be found at the quilt shops? I usually don't even try them because I've assumed everything is out of my price range.
Posted by Michelle at 10:15 PM No comments: