The jinx continued with broken glass lurking under the surface of the dishwater and wasps buzzing around in the front room, but the bugs are dead and my cut will heal and things seem to have calmed down over the past couple of days.

We didn't have a single bit of trouble with the long arm when I went over to Mom's yesterday and quilted Simple Pleasures. We always have trouble, either because the machine is being cranky or I'm going to fast and messing up the tension on my own, but this time things worked. 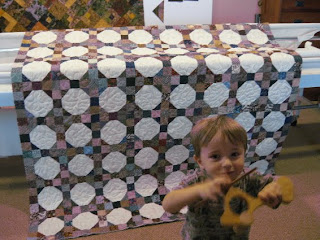 The kids were even angels, until I fed them lunch and tried to go buy binding. Then things fell apart, but my quilt is quilted and it's easier to schedule a fabric hunt than it is to schedule long arm time.

Quilting Cotton was 30% off at Joanns, but everything I looked at was $6.99 a yard. Even if it seemed to be better quality than what I usally buy there, it was frustrating. That makes the sale price higher than what I paid for that really nice stuff from Whittles and almost as high as Connecting Threads. I could get similar prices shopping the sale rack at real quilt shops.

I found something to bind my quilt with and a couple of other fabrics to add to the quilt that I'm cutting pieces for, but not as much as I'd hoped to find. I'm either going to have to wait to find more fabric, or dig deeper in my stash, or make this one a little less scappy than I want to. 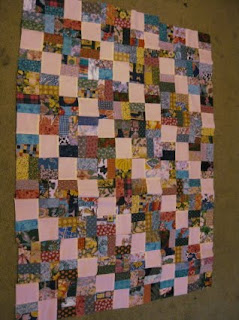 The blocks for the latest baby quilt are finally pieced and I was able to lay them out. I think I like it. And I've got a plan for the next one.
Posted by Michelle at 5:55 PM No comments:

If a twelve year old girl mixes up a batch of chocolate cookies and turns her back on the bowl for just a moment, her three year old brother will bring in the box of salt from the kitchen to the dining room and dump half of it into the bowl.

If a mother figures out exactly what time her kids need to be on Webkinz to do the neat activity they've been waiting for, and it's a time they should be able to do it, the website won't load for two solid hours.

If a quilter is foolish enough to think she'll get her project done soon, she'll wind up with a big stack of blocks to rip out and redo.

I'm thinking we're jinxed here. There actually was a voodoo doll made recently, and it's not unreasonable to think that some of my hair was in it, even if it was intended for the maker's big sister.

But it wasn't a total loss. We do have kinda salty cookies. Maybe we'll time it right and get to play with Doug the Dog tomorrow. And maybe I'll get that quilt top done.

And Alex's quilt top is done. We were talking about Christmas wants this afternoon and I asked her what would make her life happy (not that she wasn't happy at the time) and she totally surprised me when the answer was that she wished her fish blocks were square.

I'd forgotten about the fish quilt. She started it months ago, maybe last summer, and was making great progress until she decided not to bother with quarter inch seam allowances. It's her third quilt. She knows how to do this right. But she didn't. And she didn't want to rip out and redo forty-eight blocks -- not that I'd do it on my own quilt either!

I was going to make her deal with her own mess, until she said that this afternoon and I realized that I could probably force the blocks together into a wonky but assembled top. It's not like I haven't done it plenty of times with my own projects. 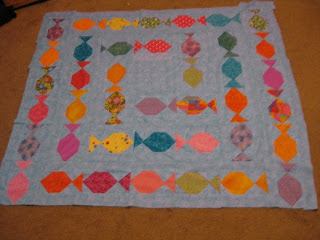 And I'm glad I did it. That feeling of avoiding a project because you're afraid it's beyond saving is a miserable one. I've had it about enough projects, but I never thought of Alex's fishes this way until I was trying to get them sewn together into a top.

It really is a cute quilt. She picked the pattern and fabric and did all of the blocks on her own. I'm glad we'll be able to get it finished.

But I refuse to salvage lace knitting. With that, she's still on her own.
Posted by Michelle at 11:30 PM No comments:

Halloween is in the air already. And on my house -- look who was napping on the front porch when I stepped out there last week! Isn't he just the cutest thing? I'm trying not to dwell on the sign in front of the veterinary clinic that warns me about rabid bats every time I drive by. 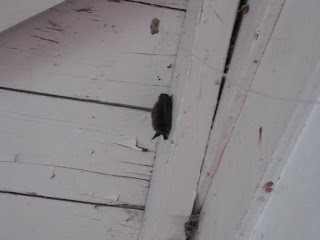 We were careful to leave him alone and kept our fingers crossed that he'd find his way back where he belonged once it got dark again. Hopefully he's back out in the barn doing his batty thing.

There hasn't been a lot of quilting time lately. If I could do that fifteen minutes a day people keep recommending, I'd be making progress on the gorgeous quilt that's in my head, but I've got a sneaking suspicion that most of the pople who keep recommending that aren't homeschooling four kids. I know -- there are people homeschooling six or a dozen whose dishes are all done and carpets vacuumed and finished three quilts this week, but I'm not one of 'em. 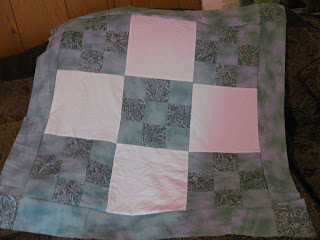 The white looks much less stark in real life, but I still think it needs some applique or something. I've just got to figure out what to stick in those empty squares.

Today's project has been crumb blocks. My plan is to join them in strips and make a quilt similar to that one I did yesterday with the strings, but I'm really not sure if I have the patience or not. 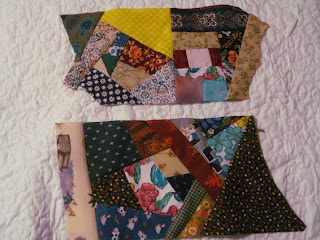 What I do have is a ton of crumbs and strings and bits and pieces. So in addition to piecing the two hunks here and a few more that didn't fit in the picture, I've been sorting through a bin and cutting strips of lights and darks for courthouse steps and bricks for another Fun With Bricks quilt...which could be why this is taking so long!
Posted by Michelle at 11:23 PM 1 comment:

I know, I said I wasn't going to pull out the camera tonight. But that was when I didn't even expect to finish the strips for my new little baby -- and now the strips are done, the sashing is done, and I'm just too happy with it not to share right away! 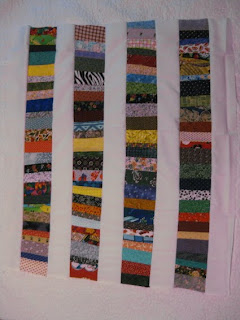 I didn't repeat any of the fabrics, so I'm guessing there are close to a hundred different prints in there. I'm not sure if the strips really did come out that crooked, or if it's just the way the quit way lying when I took the picture. Either way, I like it.

So that's one new baby top down, nine more to go! Think I can manage another tomorrow?
Posted by Michelle at 11:28 PM No comments:

Progress! I dragged a box of fabric strings down from the sewing room this afternoon and started piecing strips for a baby quilt I've had planned. Most of the strips are done and I haven't even dented the box.

I think that's going to be the new goal -- finishing ten baby quilt tops from stash. Strings, crumbs, orphan blocks from the thrift store boxes...whatever I can come up with.


I'm not feeling quite motivated enough to dig out the camera, so I'll take pictures tomorrow when I'll hopefully have the top together.
Posted by Michelle at 8:36 PM No comments:

My sewing machine is half buried under a pile of mail and school books and all of the other things I've been dealing with lately that aren't quilting. Or knitting.
I'm hoping that Susan's Labor Day Retreat might help me get back on track tomorrow.
Posted by Michelle at 6:37 PM 1 comment: