It feels like I haven't accomplished anything this month so I went back through my blog entries to see if I had forgotten something.

Posted by Michelle at 6:00 PM No comments:

The website said our order will ship within three working days and take an additional three to five working days to get here. So how can the curriculum I ordered on Wednesday be scheduled to get here tomorrow -- the one day I can't drop everything and sit on the porch waiting for it?!

I was hoping to maybe get the books by the end of next week, but now it's killing me to know that I could have them tomorrow if I drive 100 miles round trip and get us back down here in time for Heath's birthday party. Or I can wait until Tuesday and have the FedEx guy bring them right to my door. The weather has been weird -- it actually snowed earlier today -- so I guess I should be patient.

It's just that we spent a scary-huge amount of money on those books and I won't rest until they're actually here and not getting tossed around in a box somewhere.

I don't suppose there's any chance my birthday yarn from Knitpicks will show up sooner than it's supposed to?

And speaking of Knitpicks, I got a fantastic birthday surprise yesterday from my mother. She'd told me she left a little present at Grandma's for me and to expect my real present later. In the gift bag was a box from Crafts America Group. I got my hopes all up, then decided she was probably reusing the box my Christmas yarn came in...but there were ten skeins of sock yarn in there. The same exact colors she gave me for Christmas. Huh? Maybe she went to the website and picked out colors and it was a weird coincidence that she duplicated the ones from a couple of months ago...

When we got home, I pulled out the yarn again to see if maybe I was the one who was confused and found the set of Harmony sock needles. No way did Mom buy me a second set of those by mistake!

It turns out my Christmas present got lost in the mail, Knitpicks sent a replacement, then the original turned up weeks later and when Mom called about returning it, they told her to just give it to someone she knew who knits.

I've been using the Christmas needles non-stop for the past couple of weeks and my love for these sock needles is a little ridiculous. But they're so pretty and nice to knit with and the case is perfect. I was going to buy an extra set of size 1s -- they come with six needles and I knit with four, so two sets would mean three possible pairs of socks.... Now I've got two complete sets and there are six different needle sizes, so that would be 18 pairs without even dipping into my plastic or bamboo needles...

It might just be possible that I've got enough skinny little dpns in my life, but of course now I'm so in love with the prett shiny Harmony wood I want a set of circulars.
Posted by Michelle at 1:37 PM No comments: 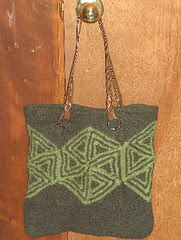 I'm glad I went with the purchased handles instead of making due with I-cord. Even if they are slightly sticky vinyl, these handles make the bag look really polished. I used it at church this morning and it's a great size for my wallet, keys, an extra diaper, and all of the stuff the kids bring out of Sunday School and need me to hold for them.

For the first time in forever, Bill had a whole string of days off from work, so we loaded up the kids and drove to Reno. We checked out the new Cabela's (a huge disappointment compared to the one in Salt Lake City), wandered around the shops in Virginia City, and stayed at Circus Circus where we saw the circus acts, ate far too much at the buffet, and had a blast playing midway games with our two-for-one coupons. Alex has a talent for catapulting stuffed chickens into pots on a revolving stand. I even managed to get one in by following her advice.

The pass was totally clear on the drive down, but on the way home it started to rain. Then the rain got kind of thick. And white. And the temperature dropped ten degrees in less than half an hour. So we headed back for the casino (which is considerably cheaper than the regular motel we usually stay in on our way down south), got another room and more coupons and had buffet again and catapulted more chickens. And drove home the next day across the other pass which also had thick white stuff falling from the sky.

Now that we're back, I'm working on a pair of socks for myself and daydreaming about the new colors at Knitpicks. 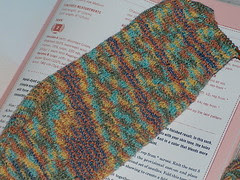 Posted by Michelle at 6:17 PM No comments:

If I ordered a few of that to knit the boys socks with, I'd know if I wanted enough to try one of the gorgeous patterns on the Garnstudio site. They also sell the Eskimo for those bulky lace socks that had me so fascinated...

I'm not buying yarn right this second, but what has me really excited is the Ravelry feature that led me to it. On the yarn page there's a "Buying Options" tab that leads to a list of online stores -- and then directly to the page with that particular yarn. That is so neat! I wasted far too much time on Google trying to find the Eskimo and never was successful.

I still don't know how to crochet. If I did, I'd probably know better than to try making a Red Riding Hood and Grandmother Topsy-Turvy Doll that can be compared to the size of a quarter. But when I stumble across a free pattern this nifty, I've just gotta print out a copy for my notebook full of things I want to make if I ever learn how.
Posted by Michelle at 4:55 PM No comments:

not quite an fo, but close enough

This is what I did yesterday afternoon. 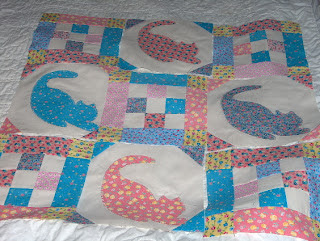 I've still got to join the blocks together, then figure out if it's going to have borders (there aren't enough scraps left to do the one the pattern calls for) or if I'm going to hang it on the sewing room wall the way it is.

A pieced top or a set of finished blocks, in my mind at least, can sit around for a hundred years without counting as a UFO. One of these days, I'll get them quilted. Or maybe I won't. For this one, it doesn't matter. I was just playing around with some scraps and a cute pattern I found in a library book.

The shaded nine patch blocks are all cut out and mostly pieced. Those will get put together and quilted because I'm determined to wrap up in that quilt.

And once it's done, I've got my eye on a new pattern. This one calls for 2176 two inch squares. That's only about three times what I did for the shaded nine patch -- I can manage it!
Posted by Michelle at 5:57 PM No comments:

Three inch squares of ugly scrap fabric are addictive. I didn't realize that. I thought I was cutting up the stuff and sewing it together in a way that will hopefully disguise some of its ugliness.

The lights and darks were giving me trouble until a picture in a quilting magazine provided the answer. Muslin! It's definitely light, lighter than all but a couple of the fabrics I'd been trying to use. Next to it, pretty much everything else can work as dark or medium. And I've got muslin.

This is fun. I cleared all of the toys out of the front room this morning and laid out what I had. It didn't look like much when I was crawling around on the floor, but it's photogenic! 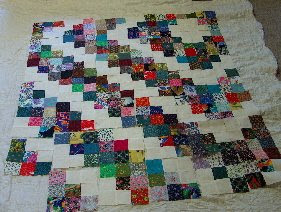 That's about half of the squares I need for the size I'd planned. I cut the rest of the pieces this afternoon, so now all that's left is sewing and pressing. Oh, and joining the blocks together and finding backing fabric, and all of those pesky little details.

I am so happy with the way this is coming out!
Posted by Michelle at 4:58 PM 2 comments: