This Yarn is Loud

I started to unravel the sweater Monday, thinking I'd use the yarn for one of the nifty felted boxes from Mason Dixon Knitting. Then it started to whisper that what it wants to be when it's all done is a felted birdhouse. That's one of the yarn diet rules, you know. The yarn you're trying to use immediately starts whining that what it really would work best as is the thing you'd have to go out and buy a pattern for. 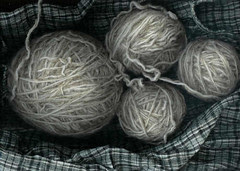 I'm not buying a new pattern to make a scratchy thrift store sweater happy, even if it does seem to be handspun. It's just going to have to shut up and be a box. Or a mobius bowl, because A Second Treasury of Magical Knitting finally came in at the library after months and months of waiting and I can't get over how fantastic those baskets and bags are!

I got out of bed before 6am to work on this and watch a zombie movie. I wasn't sure about the stitch pattern or the movie at first, not until I figured out that it would look neater if I crossed over one stitch at a time and the zombies turned up. Now I'm hoping the movie has a commentary so I can watch it again at naptime and get some more done on the Dream Swatch.

I've got this plan. Before I buy any more yarn or fabric or whatever, I'm going to spend a hundred hours working with what's already in my stash. The plan was inspired by UseWhat I Have and Finish What You Have and a question one on of the lists about what you'd knit if you had to knit EVERYTHING in your stash before buying everything new.

That last one was just scary. I know it was just a question, not a serious suggestion, but it still sent a chill through me. Once I calmed down again, I started thinking it might be fun to go through my stash and make a list of what I could do with all of that yarn. I will do that, once I get some time up in the sewing room.

Right now, though, I'm giving myself a chance to use some of my yarn and fabric to make some of the stuff I've had planned since two pregnancies ago. Or some new stuff -- as long as I'm using existing stash, printing patterns off of the internet or checking out books from the library is okay.

I figure it'll take a couple of months to do that much knitting/sewing/whatever. I don't know if I'll wind up doing a bunch of little projects or a couple of big ones -- whatever I feel like doing with what I've got counts. I'm still working out the rules. Unravelling the sweaters I bought to recycle counts. Preshrinking and ironing quilt fabric counts. Going through Mom's two bins of scraps and cutting out squares for the I Spy counts. Winding yarn from skeins into balls counts. Reorganizing my binders of knitting patterns or searching for a specific pattern I can't find doesn't.

What was I doing?

It's our fourth full day at home and I still haven't had a chance to settle in with one of my projects. I've tried to do two major grocery shopping trips and both times had to rush through the store with screaming babies and forgotten half the stuff I meant to buy. I've also been out twice to buy yarn -- isn't it convenient when you can get yarn and groceries under the same roof? And strawberry picking with the kids and to a quilt show and to the library and to Kaiser to get another ultrasound of Leif's kidney... I'm really ready for a chance to sit down!

Until I checked the list of WIPs on my sidebar, I couldn't even remember what I was working on before we left. The quilts, which aren't on the list. A summer top for Alex...the traveler socks...the feather and fan shawl, which I've decided was just a swatch so I won't feel guilty about unravelling it and using the yarn for something else...the Regia Jubilee socks...How Does Your Garden Grow? which is still just a long piece of green I-cord...

And the warshrags, which deserve a post of their very own.
Posted by Michelle at 7:04 PM No comments:

I've been travelling with my husband and the kids -- and my socks. Wow! After one miserable attempt last year that involved a poorly maintained road and a cranky skein of Euroflax, I hadn't tried knitting in a moving car. I expected to maybe knit a few rounds on my sock when we stopped for gas, if none of the kids needed me to take them in to the bathrooms or change a diaper. But I pulled it out on a boring stretch of I-5 and the next thing I knew, it was an inch long and I was ready to do the heel, mostly with my eyes on the road. (And because there are other knitters out there who love to jump to the worst possible conclusion, I'll add that I was in the passenger seat, NOT driving, and I've heard all of the nasty speculation about what would happen if the airbags went off while I was holding sharp pointy things.)

There were some nervous moments when I had to ladder up a dropped stitch and figure out what to do with an accidental YO a few rows after the fact, but they were worth it because those boring stretches flew by. I'm not sure how just keeping my hands moving could possibly make such a difference, but it did. 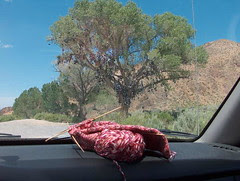 We found a shoe tree! It doesn't show up well in the picture (you can click on it for the bigger version), but there are hundreds of shoes wedged up in the branches and hanging in big clumps. Bill doesn't think the multi-colored lump lying there on the dashboard looks anything like a sock, but I know that another knitter would be able to tell.

We kept driving and the sock kept growing. I wasn't to excited about the leg, because the broken rib pattern I originally had in mind would have meant counting, then I remembered what Bonnie posted to Knitting Mothers about alternating random bands of stockinette and garter and ribbing and suddenly I was having all sorts of fun.

I added three color repeats to my latest Mason Dixon warshrag while sitting in a Motel 6 parking lot at midnight with a really fussy baby on my lap, wondering why I was out there because no one in the place could possibly be sleeping through that thunderstorm, especially when one crack set off every car alarm in the parking lot. I got lucky and was only out there an hour before he finally fell asleep. 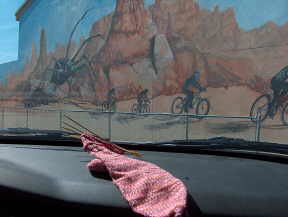 We made it to Utah and the sock sat neglected in my purse while we dug trilobites and hiked a bit and took the kids to every cheap or free museum we could find and drove a bit. Posion Spider Mesa was never a possibility because we don't have the axles or gear ratio or whatever else we need to tackle something like that. The stupid Durango kept overheating anyway, so we barely left the pavement at all. The one year I'm finally not pregnant and can handle some rough roads! 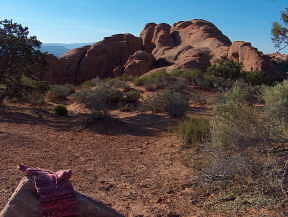 By far the best knitting on the trip was in the campground right before dawn when I finished another warshrag while watching the sun come up over the rocks. I was going to try to get up early again the next morning (hopefully without the raging migraine that woke me up the first time), but the hiking turned my legs to jelly and it was too much work to crawl out of my sleeping bag.

It was a great trip, but I'm glad to be home!
Posted by Michelle at 2:56 PM No comments: