we take our rocks very seriously 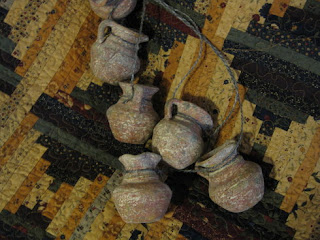 When I was coming up with a name for the Moab or Sedona quilt, I decided against asking my husband if he thought the colors were right. Even if they weren't dead on, I felt like they captured the feel of the places. And, after finally coming up with a name I liked, I didn't want to start over.

The next night, I was proven right when he called me into the bedroom to ask me to look at the rocks in the movie he was watching, Yellowstone Kelly. Wherever they were, it didn't look like anything we'd seen around Yellowstone. Turns out it was filmed in Coconino National Forest -- those were the red rocks around Sedona.

Last night, I thought the rocks in the movie looked like Monument Valley...he thought they looked like something else...turned out that it was Durango Mexico.
Have I mentioned how wonderful the Kindle is for quickly looking up facts? And when did I get so interested in rocks?

Not much change in the numbers this week, except for some some new yarn I bought for the NICU hats. I needed those particular colors -- if all goes well, you'll see why later this week! For more weekly stash reports, click over to Patchwork Times.

Love the colors you've choosen even if they don't match the rocks.