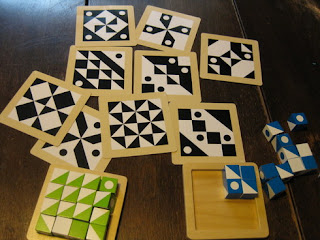 That design the middle is Broken Dishes...and I'm sure if I went through the rest of the game cards I'd find more patterns we could name. But these aren't quilt patterns. They're the cards for Q-bitz

, a game I ordered for the family after Quinn played it with his speech therapist one day.

We've simplified the rules for the younger kids, and I just realized when I was looking at the company's website to get the details for this post that we've never played it quite as it was intended. In the third round, you look at the card for ten seconds and then re-create it from memory. That might strain my brain just a bit too much!

My two littlest ones have decided that it works best to lay the blocks directly onto the cards with difficult patterns. Either that, or they just ignore the cards and play with the blocks. It keeps them busy, and I can almost see the little brains working.

I do think quilters might have an unfair advantage at this game -- we're used to combining squares and triangles to get the shapes we need! 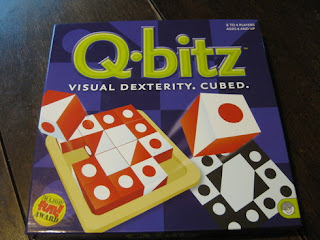 This post is linked to Works for me Wednesday at We are THAT Family.
Posted by Michelle at 4:28 PM

Cute game Michelle!! I might have to check that out.

Well isn't that fun?! It really does look like quilt blocks! :)