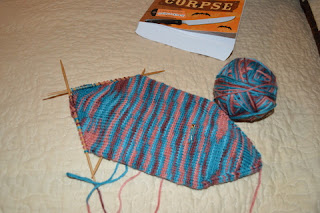 I'm still knitting socks, so many of them that the backs of my hands are starting to ache when I'm not knitting. I should probably take a litle break, but I don't wanna...

At least I've got good books to read! 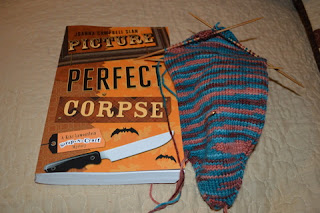 Luckily, author Joanna Campbell Slan did a great job of  quickly reminding me where she left off in the last book. To save herself, her mother in law, and her friend Johnny, Kiki has just shot the man behind her first husband's murder, in the head. Brenda, the estranged wife of Kiki's boyfriend, tried to shoot Kiki, but the bullet only grazed her temple.  I've spent almost a year waiting to find out what happened to everyone.

This book picks up right where the last one left off.  Just as things start to settle down a bit, Brenda's body is found in an abandoned farmhouse. Casings from Detweiler's gun are found next to her body and he's immediately arrested. Kiki is absolutely sure that the father of her unborn child and love of her life is innocent, but she's forbidden to meddle in the  case for fear that she might uncover something that could be somehow used to damage his defense.

Kiki is also trying to track down the young woman who appeared at Time in a Bottle, the scrapbooking store where she works, and announced that she was responsible for the death of Kiki's employer's son. There's also another puzzle involving Kiki's daughter Anya's best friend.

I highly recommend the Kiki Lowenstein books, but I wouldn't start with this one. There's a whole lot going on and I think it will make more sense if you already know the characters and their backstory.  Once again the book ends with a cliff-hanger and once again, I'm going to be very impatient to find out what happens next.

Edited to add a giveaway -- shortly after I posted this, Joanna emailed and offered to give away a  copy of Picture Perfect Corpse to one of my readers. To enter the giveaway, just leave a comment on this post before 11:59 pm May 6. I'll use the random number generator to pick a winner and announce it here next week.

Silly disclosure -- I pre-ordered my copy from Amazon with my very own money.  For more pretty knitting projects to drool over, check out On the Needles at Patchwork Times and Work in Progress Wednesdays at Tami's Amis.

Your sock is lovely! I love to knit socks and have never stopped because of a little hand pain. I have stopped for shoulder pain though.

tales from a handmade home said...

Hello fellow sock knitter, your socks are fab, great book recommendation too, I shall have to look up that author, I could do with a good bedtime read.

I too am knitting socks,and I LOVE Joanna Campbell Slan. Didn't realize Picture Perfect Corpse was out. Hooray!!!!

The books sound like a great series. Thank you for having a giveaway. :-)

i haven't read any of her books but will definitely look them up and check them out...

This sounds like a wonderful book. I have not read any other books in the series, but you have me sold on the fact that I must get the first of the series and start reading them. How many have come before this one?

Had to laugh at your not wanting to quit knitting. Shoot if your hands don't hurt when you are knitting than it must be ok to keep going LOL

I wish I could knit socks! The book sounds like a great read.