{yarn along} I killed my sock!

Remember that sock I showed you last week -- the one that was done up to the heel? 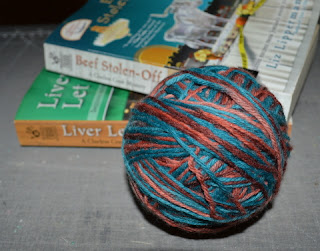 I made a mistake. The stitches got redistributed a bit, so my heel stitches were off. And I was starting to get a bad feeling that the sock was way too big.  I tried it on and that bad feeling got worse. After I'd pulled the needles free, I tried it on again to see how badly I'd miscalculated.

And the darn thing fit!  But getting those live stitches back onto the dpns sounded like more of a hassle than reknitting the foot of the sock, so I gave up.  I love these colors, so I'll cast on again later with an actual stitch pattern. That heel would've bugged me.

And next time, I'll try to remember to count my stitches before starting the heel! 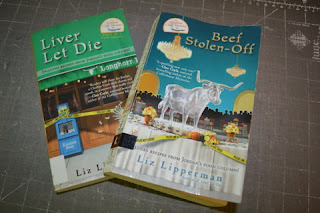 In a Yarn Along post a couple of weeks ago, I wrote about Liver Let Die, the first book in the Clueless Cook mystery series. I wasn't very far into the book and hadn't decided if I liked it or not.  Now that I've finished Beef Stolen-Off,

the second book in the series, I can definitely say that I'm hooked and will be watching for the next one.

Jordan McAllister aspires to be a sports reporter, but she's been making her living writing personal ads. When the newspaper's culinary reporter is injured in a jet ski accident, Jordan is thrust into the job. There's just one problem -- she doesn't know much about food beyond take out pizza and Hostess Ho Hos.  But with the help of her neighbors, she's come up with recipes and slapped fancy sounding names onto them, making the Kitchen Kupboard column more popular than ever.

In Beef Stolen-Off, Jordan is sent to the Cattleman's Ball. The plan is that she'll write about it in her column and get her readers to eat more beef. But  her blind date for the evening winds up dead.  There's cattle rustling, and a haunted house (have I mention that I love haunted houses?), and a fake seance...  It's a fun read!

Silly disclosure -- the books came from the library.  For more pretty knitting projects to drool over, check out On the Needles at Patchwork Times and Work in Progress Wednesdays at Tami's Amis.

Too bad about your sock!

Bummer on the sock!

Those titles crack me up :D

I had to kill a sock yesterday because it was too small for my granddaughter. Hate having to do that.

My first sock is still my first sock! Only made one and found I really don't like knitting socks. I may try again some time in the future. Hope it goes better for you.