when I was placing my reserve for Still Missing. 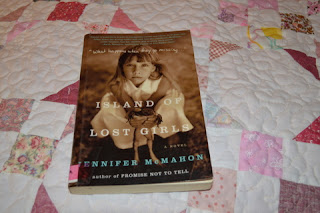 While parked at a gas station, Rhonda sees something so incongruously surreal that at first she hardly recognizes it as a crime in progress. She watches, unmoving, as someone dressed in a rabbit costume kidnaps a young girl. Devastated over having done nothing, Rhonda joins the investigation. But the closer she comes to identifying the abductor, the nearer she gets to the troubling truth about another missing child: her best friend, Lizzy, who vanished years before.

The book opens with a little girl playing submarine in an abandoned car, her game interrupted when a body is discovered in the woods nearby. Then it jumps back a couple of weeks and  after that it continues to alternate between the character's lives in 1993 and 2006... it took me a while to figure out who was doing what when. In hindsight, that was partially because that little girl in the submarine car immediately faded into the background.  And there are quite a few little girls in this book -- the one who was kidnapped by the giant rabbit, another one who was kidnapped and made national news, one who died years before the story started...  Compared to some of the other books I've read lately, this one felt like a bit of a dud.
Posted by Michelle at 4:00 AM

I just finished listening to Prayers for sale, it mentions quilting a LOT in there, didn't know the author wrote more books with a lot of quilting- going to hunt down more!! (audio books)