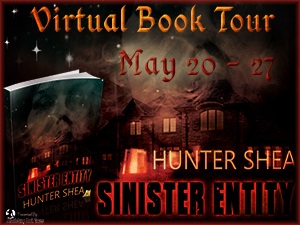 I love haunted house books, so as soon as I saw the description for this one I applied to be part of the tour.


The Leigh family is terrified. They’ve been haunted by the ghostly image of their young daughter, Selena. But how can that be, when Selena is alive and well, and as frightened as her parents? With nowhere else to turn, the Leighs place their hopes in Jessica Backman, who has dedicated her life to investigating paranormal activity. Accompanied by a new partner who claims to able to speak to the dead, Jessica will soon encounter an entity that scares even her. And a terror far worse than she imagined.

The horror builds gradually  as members of the Leigh family first see Selena in places where she isn't and their confusion gives way to the realization that something truly dangerous has invaded their home. At the same time as we're learning about the problems in the Leigh household, we're being introduced to ghost hunter Jessica Backman and psychic Eddie Home, who has turned up on her doorstep with  a message from her dead father.

One of my pet peeves is parents who don't keep track of their children while they're doing potentially dangerous tasks. So I found the scenes where Selena's image appeared when her parents absolutely knew their daughter was elsewhere especially creepy.

Sinister Entity is a sequel to Forest of Shadows

, which I haven't read, but it stands on its own. There's just enough back story for me to understand the characters and decide to add Forest of Shadows to my Amazon wish list.

Hunter Shea is the author of the novels Sinister Entity, Forest of Shadows, Swamp Monster Massacre and Evil Eternal. His stories have appeared in numerous magazines, including Dark Moon Digest, Morpheus Tales and the Cemetery Dance anthology, Shocklines : Fresh Voices in Terror. His obsession with all things horrific has led him to real life exploration of the paranormal, interviews with exorcists and other things that would keep most people awake with the lights on. He lives in New York with his family and vindictive cat. He waits with Biblical patience for the Mets to win a World Series.