{yarn along} a different way to knit socks...

I'm becoming more and more convinced that Knitpicks Dancing and Patons Stretch Socks are the same exact yarn, except for the colors. The fiber content is the same, and it definitely feels the same. I wonder if the Patons yarn pools....but it's too late to start wishing for pooling now! 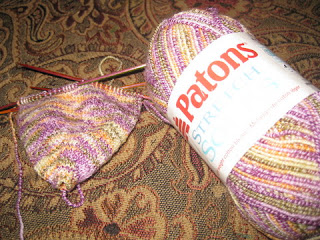 I've been reading about socks, too, and found a neat book to share with you.

When I first stared knitting, I made myself a pair of socks on straight needles. They were a disaster. In her introduction to Knit Your Socks on Straight: A New and Inventive Technique with Just Two Needles

, Alice Curtis says that she tried several patterns for easy to knit socks on two needles and "The results were nothing I would ever want to wear! They neither looked nor felt good." It makes me wonder if we tried the same pattern.

Alice set out to create two needle socks for her students who were determined not to use dpns -- and boy, did she succeed! The one thing I don't like about writing reviews from digital copies is the inability to share pictures -- check out the book's Ravelry page to see what she accomplished. It's way more than I ever would have thought you could do with straight needles (at least as far as socks are concerned.)  There are socks in a variety of sizes and styles, and using different weights of yarn.

I'd be tempted to try a pair myself, but I can't quite convince myself to do that much purling. Not when my own fear of dpns is so long gone. For knitters who still don't want to use them, and don't mind seaming, I think this book would be a goldmine. And also for more experienced knitters who want an interesting challenge.

I can't imagine seaming socks and having them be comfortable. My preferred method of sock knitting is 2-at-a-time on a long circ. I can knit with dpns if need be, but am more likely to have second sock syndrome that way. :)

Minding My Own Stitches said...

Sounds intriguing but I don't think I could talk myself into that much purling either. What's to improve on with knitting in the round?

Your socks will look very pretty in those lovely colours.
I can't imagine seaming socks, but I just knit a pair of Anna Zilboorg's free sole socks (and am keen to cast on another pair) and I don't see why that technique could not be continued all the way up the leg.

I knit my first few socks top down on double pointed needles, but then I decided to try toe-up circular needles and love them. Sooo much easier--and I never have the one-sock syndrome any more!

I got so sick of knitting socks that I gave up knitting them. Still have a big boxful of sock yarns in storage, too!! The book sounds so interesting, that I pre-ordered it. Anything to beat the boring 'round & 'round & 'round!! (I don't mind purling at all.)

These are going to be very pretty socks.
You made me laugh, I choose patterns by how much purling has to be done. Sometime you just have to do it though. But for me, not so much with socks. :)