that piano at the thrift shop works just fine

Ever since I saw the pink astrological couch, I've tried extra hard to remember my camera when we go thrift store shopping. I know there's neat stuff out there, because all of the other thrift store shopping bloggers are finding it, but I sure haven't been seeing any of it myself lately.

This week I heard something neat...

At one of our regular haunts, they've got a baby grand piano. The first time we saw it, it was priced at $6,500.  I seriously hope that they're advertising it somewhere and not just counting on someone to walk in with that kind of budget and the need for a piano...

Over the past year, the piano has been marked down to $3,500 and moved from the entrance of the store to a less prominent spot. (I'm really not obsessed with this thing, I'm just trying to keep my youngest two children from poking at the keys, which is easier now that it's not the first thing they see when we step into the store.)

It's also been joined by two upright pianos and I've had to convince my children that even if they paid for it with their own money, I can't let them buy a piano for their room because there's no way their dad is going to haul it home.

While we were looking for t-shirts and shorts for the boys this week, the store suddenly filled with music. Intricate, amazing classical music that an old guy in sweatpants and a baseball cap was playing on that baby grand. I don't think I've ever shopped for used clothes to live music before.

I was looking for a little backpack to use on short hikes. The plan was to find one that  I could transfer the contents of my purse into, because I hate carrying my purse with us, and I never feel safe leaving it in the car. Walmart had a new one that would've done the job, but I've been reading the Non-Consumer Advocate a lot lately and convinced myself that I could find something at Goodwill or St. Vincents.

But I did spot this little girl. She's the twin of one that was on Katie Wolk-Stanley's blog a couple of weeks back. Katie thought she looked like she was about to record a power ballad -- I think she looks like she's afraid of something. (Might be all of those haunted house books I'm reading lately...) 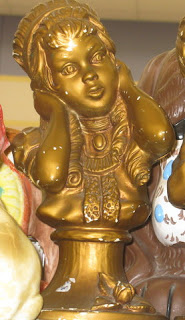 It turns out she is trying to block out some scary sounds... 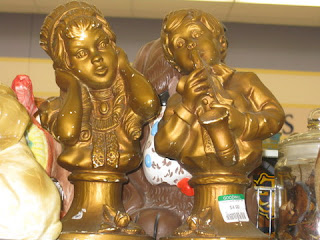