About two seconds after I got the broom sales block traced, I decided that what I really wanted to stitch next was the clothesline... 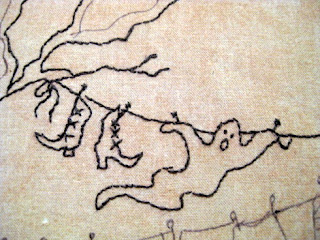 Between the house and the tree and the signs and the clothesline itself, there's a ton of detail on this block! But, an evening at a time, it'll get done. Maybe sooner than I expect, because it's awfully tempting to just curl up in the recliner with my stitching in my lap and not work on anything too ambitious.

Did you buy yourself a last box or two of Twinkies? The kids and I stopped at Safeway tonight and grabbed the last three boxes of Ding Dongs (because those are Hubby's favorites.)  The guys in the checkout line ahead of us got the last of the Twinkies, but that's okay. The generic ones  are almost as good. And it's not like we eat them that often anyway...but it's the point of the thing!

And did you see that signups are open for the Nancy Drew Blog Hop at Sew We Quilt?!
Posted by Michelle at 5:00 AM

That is going to be darling.

I haven't foiund a good substitute for the Snowballs yet!! ;(

I went looking for DingDongs but none were available :(