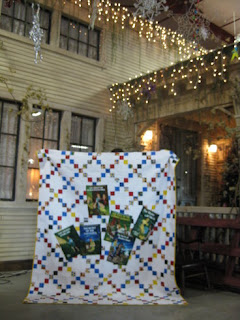 My Nancy Drew quilt had to have the perfect backdrop. I thought about trying to get a picture in front of the Victorian mansion where hubby and I were married, but someone told me I'd probably get yelled at. I didn't really think they'd yell at me -- not for taking pictures of their wrought iron from the sidewalk, but the logistics of doing that with four kids in tow were a bit daunting.
Then I thought of the brick walls at the old city hall building, which was the library back when I was reading the Nancy Drew books...
And then I remembered this place -- 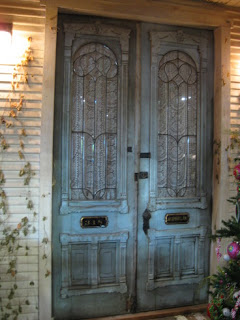 Would you believe that this is inside a furniture store? I should've taken pictures of the gas station and the aiplane and the double decker bus...the place just has to be seen to be believed. And the owner happily gave me permission to take a picture of my quilt in front of their old moss covered mansion.
Which it turns out is something else... 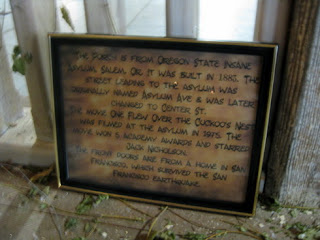 THE PORCH IS FROM OREGON STATE INSANE ASYLUM, SALEM, OR. IT WAS BUILT IN 1883. THE STREET LEADING TO THE ASYLUM WAS ORIGINALLY NAMED ASYLUM AVE & WAS LATER CHANGED TO CENTER ST.
THE MOVIE ONE FLEW OVER THE CUCKOO'S NEST WAS FILMED AT THE ASYLUM IN 1975. THE MOVIE WON 5 ACADEMY AWAYS AND STARRED JACK NICHOLSON.
THE FRONT DOORS ARE FROM A HOME IN SAN FRANCISCO, WHICH SURVIVED THE SAN FRANCISCO EARTHQUAKE.
That's where the fun coincidences start. The first house Bill and I bought was off of Center Street, but we never knew that it was once called Asylum Ave. That would've made giving directions to the house more interesting!
And there's a Cuckoo's nest connection, too. If you've seen the movie and remember the scene where guys were sitting on lawn chairs and watching the news on televisions in the appliance store window -- that was my family's store and we would have been living in the apartment upstairs at the time it was filmed. Not that  I knew -- I would've been two years old at the time. I didn't  find out about it until I was an adult.  There's more information about the movie and original hospital building here.
You can find the free pattern for the quilt at the Moda Bake Shop, and enter to win vintage Nancy Drew books on this post.
Posted by Michelle at 7:00 AM

That's such a fun story...thanks for sharing. The quilt looks lovely hanging there. An insane asylum always adds a lot to a story and certainly gets my attention. LOL

What a great story. Love your quilt. My sister & I loved reading Nancy Drew growing up. I have a collection of the older printed books. Can't wait to download the free pattern. Would love to make that quilt for my sister. Thanks so much for sharing!

I'll have to see if I can 'dig' up any Nancy Drew books to send you. I was a Happy Holister book fan (not fan enough to spell it right- lol)