I'm still not loving my Mock Croc Socks. They're not as much fun as the new shawl, or the pretty blue lace socks, or even the self-patterning Opal pair.  But I've cast on the second sock and if I do a couple of pattern repeats now and then, eventually they'll be done.

At least that's what I'm telling myself. 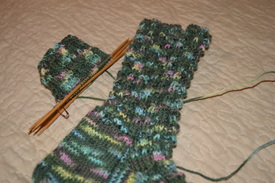 I discovered Dexter when they were running the edited version on late night network television a few years back. I actually wound up trading my Weed Whacker quilt for seasons one and two on DVD so I could catch up on what I missed.

Then I found the books, which follow a completely different plot than the television series. They both started out with the same events, but things have taken a different turn.

I didn't care much for Dexter in the Dark or Double Dexter, two of the most recent, so I didn't have the highest hopes for Dexter's Final Cut

.  Then I started reading... I loved this one! I think it might be my favorite book of the series. The author has been quoted as saying that "this novel is very different than the previous, shockingly so..."

And it is. The tone is different...Dexter is different.... I'm making myself nuts researching to see whether or not this is the last book in the series. Somewhere I got the idea that it was, but now I can't find anything to confirm it.  Maybe I was confused with the television series, which is ending.

Knitting socks? I can't do it! I do admire yours!