I do not want a new phone!

Do you remember what happened the last time we went shopping for a new washing machine? To make a long story short, after looking at all of the fancy HE machines with all of their bells and whistles, we bought the cheapest machine we could find on Craigslist.  That $35 investment lasted longer and worked better than my last brand new HE machine. (Anyone else think there's something deeply wrong with that?)  Something in it finally gave out and we replaced it last month with another old-but-new-to-us machine. 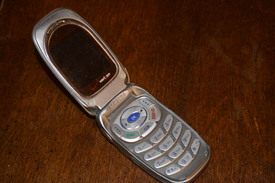 Last week, we went shopping for new cell phones. My last phone didn't live up to my modest expectations. All I want the thing to do is ring when someone calls me. I don't think that's a whole lot to ask.  Hubby's identical phone was just as unreliable as mine -- the  first weekend he had his, he missed three overtime shifts because calls weren't going through. He switched back to his old phone. That wasn't an option for me, since my battery fell out every time I answered a call. I was stuck using my new one.

Did I mention that our old Motorola phones were reliable and wonderful? When I asked for something that would have the same kind of reception that they did, I was told I'd need to go to an iPhone. That's not gonna happen -- I'd rather spend the money on fabric.

It's been a few more years and  Hubby's phone started to fall apart, so we went to look at replacements. There aren't a lot of options when you just want a basic phone, and I'm afraid that what I do get will be just as bad as the one I've been living with. There's really not much point to upgrading if I wind up with another phone that won't ring.  Hubby glued the battery into his phone, since it was a lost cause otherwise. I decided to keep what I had, wondering if I could remember where I put my old phone so he could glue it together.

I was complaining about the whole mess when my Dad remembered that he had some old flip phones in a drawer. We charged one up and switched my number to the new-to-me phone. It's too early to tell if I'm missing calls yet, but the sound on this one is much better and I can put it in my pocket or purse without bumping the screen.  Calls get dropped, but that happened with my old phone, too.

I'm in no hurry to upgrade and sign a two year contract for a phone that may or may not work. And if I see one more television commercial about how old technology is bad, I think I'm going to scream.

So now I've got a phone with a pull-out antenna that Hubby thinks looks a bit like a tricorder. But if it does the job, he's switching to its twin.

This post is linked to WFMW and Mom's Library.
Posted by Michelle at 7:25 PM

I am so with you on this! If it does the simple things it should have been designed to do it's worth keeping.

I'm so with you on this one. Fromher eon out it is gonna be cheapest and simplest for me too. Tired of haveing to replace items every 2 or 3 years that should last at least 10....Appliances are bankrupting me...

You should watch "The Story of Stuff" on you tube.