This is my second try at this pair of socks. The first attempt wasn't wide enough (I was guessing at how much stretch the lace rib would have) so I frogged and started over. This time, I think I've got it right. The stitch pattern is pleasant to knit, but I'm trying to make myself finish those Croc Socks before I let myself get too caught up in it. 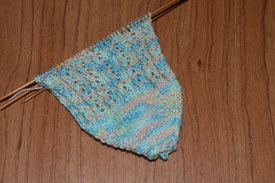 Rachel died at two a.m . . . Three hours after Skyler kissed me for the first time. Forty-five minutes after she sent me her last text.
Jaycee and Rachel were best friends. But that was before. . .before that terrible night at the old house. Before Rachel shut Jaycee out. Before Jaycee chose Skyler over Rachel. Then Rachel is found dead. The police blame a growing gang problem in their small town, but Jaycee is sure it has to do with that night at the old house. Rachel’s text is the first clue—starting Jaycee on a search that leads to a shocking secret. Rachel’s death was no random crime, and Jaycee must figure out who to trust before she can expose the truth

I didn't really care for this one, maybe because I'm reading it as an adult. After her friend is murdered. Jaycee finds herself in a tangle of high school hazing and gangs and murder. Rachel, apparently knowing that she was in serious trouble, left a cryptic note and a series of even more cryptic clues.  Even if I can get past the idea that a teenage girl whose father is so determined to be overprotective can still slip out in the middle of the night (after being caught at it multiple times), the book just didn't work for me as a thriller. There were some twists at the end that I didn't see coming, but by that point I didn't care much what happened to the characters.