{Whatcha Reading?} Cut it Out by Theresa Morris

I've had two C-sections and I have very strong opinions about the subject.

My first one was a nasty surprise -- I'd come home from the hospital the day before and been told (for the second time) that they were done stopping my preterm labor. I was at ten centimeters when I got to the hospital and my biggest concern, aside from the fact that my baby was still five weeks early, was whether hubby was going to make it back across town from dropping off the kids.

Then the labor and delivery nurse realized that the baby had flipped during the night and I was having a C-section.

While I was pregnant for the fourth time, I hoped for a VBAC.  The obstetrician told me that they were a "fad" and that everything I'd been reading about them must have been in old magazines because they were hardly being done anymore. When preterm labor hit, the nurses at the hospital told me horror stories about women driving to every hospital in the area looking for one that would allow a VBAC and finally having cesarean sections because there was no other option available.

I wound up in preterm labor (again) and was transferred to a teaching hospital with a specialized NICU. The staff there, based on my medical records and first to easiest deliveries, was horrified that I'd be forced into a repeat C-section.

Long story short, we opted to deliver at the teaching hospital, the baby was born six weeks later, the cord prolapsed, and I had my second cesarean section. That scenario they warn you about in the birthing classes, that you could have emergency surgery? That's the one I found myself in. The last thing I remember hearing was "Do we have time to put her all the way under?"  Panic does not describe it.

My babies were born safely. I believe that both of my surgeries were necessary... probably the first and definitely the second. 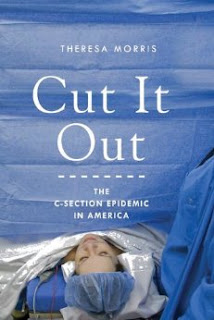 I was lied to. I was threatened by nurses at the hospital. I was overdosed on acetaminophen and then left with no pain medication for twenty-four hours while they waited for it to clear my system. (I didn't find out the details of that one until later -- all I knew at the time was that I was in a lot of pain and getting no help for it.)  And I was treated like recovering from major abdominal surgery was no big deal. Someone somewhere along the way actually told me that it was easier than natural childbirth...

I'd pretty much put it behind me until I saw the amazing cesarean quilt that Renee at Sparrow Lane Quilts made. Seriously -- I've never seen anything like it and her story about her quilt made me realize how much my two surgeries got swept under the rug. There were a lot of other, more important, things going on at the time.

And then I got a chance to read an advance copy of Cut It Out: The C-Section Epidemic in America

. Wow! I knew I'd been lied to, but until I read this book I didn't realize how much misinformation I'd been given. The C-section rate is going up and this book does a great job of explaining how and why it's happened.

That 1% risk of uterine rupture that I was willing to accept by trying for a VBAC? I thought it was a 1% risk of me dying. Turns out that the actual risk to our lives was much lower. But the insurance companies who influence hospital policy won't let one woman take a small, calculated, risk. They're dealing with hundreds of patients and lumping the risk for everyone into one decision.

I know that not everyone is going to want to read this book, but I hugely recommend it. It's fascinating and scary and I really think that the system needs to change.

And if you know someone who's had a C-section, give her some extra hugs. They really are harder.
Posted by Michelle at 4:00 AM

They are extremely harder and definetly more painful. I have 8 children. #7 was natural and #8 by C-section. Who in their right mind would choose a C-section? It hurt for weeks compared to 2 days. It left me feeling disconnected from my baby (she was a premie) And you still have to have that terrible epidural. Interesting book!

I wasn't sure what VBAC stood for but I have to tell you that I had 3 x VBAC after my first baby was breach and the doctors opted for C-section.
Never, anywhere along the way did anyone say it would be dangerous to have a natural birth after a C-section.
I was living in Australia, maybe the thinking is different there.
The 2nd baby was a forceps delivery and the other 2 just normal VBAC.
My youngest is 28 so maybe times have changed but I would like to think mothers should be encouraged to have a natural birth if at all possible.

I have had 3 C-sections. The first baby was breach and I had already been in labor for 24 hours and was told that she was in distress and a natural deliver could take another 24 to 48 hours with no guarantee that we would both survive.
Then I was told that once a C-section always a C-section and that my doctor would not attempt a VBAC on number 2 or 3.
I am sorry to say that both my daughters ended up with C-sections. My youngest was able to have a VBAC for her second child. but the oldest daughter ended up with a C-section after she was told all the horror stories of what can go wrong with VBAC's.
A C-section is major surgery I don't care what anyone says.
What was sad for me, in addition to a major surgery, getting pneumonia after the birth because of the saddle bloc and sharing a hospital room with a smoker(it was the 70's and still allowed) was my mother-in-law telling me that since I had C-sections I had never 'really' had a baby. It is amazing how much that statement still hurts even after 39 years.

Our local hospital went to a no vbac policy and I must admit, I supported it. I am VERY pro vbac. But, in this case, they has one on-call OR team of nurses/anesthesiologist at night. The next closest hospital was a 2 hour ambulance ride and they rarely choppered people out.

I also know first hand how critical surgical care is for a uterine rupture. You see, I had a uterine rupture in the evening while the first on call team was already in surgery. Everyone had to scramble to get another team to the hospital. And, my rupture happened after a normal, I medicated birth. A complete fluke.

I do think we go to sections so much faster than we should. We add pitocin way before we should "because she isn't in a proper labor pattern" but, sometimes the decision has to do with other factors.