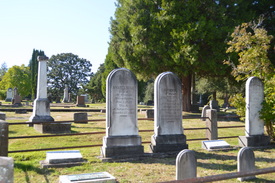 Last week, Teenage Girl and I took a quick walk through the old Pioneer Cemetery.  I wanted to take some pictures for an October post that I have planned, but it was 97 degrees and bright as could be, so I think we're going to try again on an overcast day.

It's been years since I visited this cemetery. I've been to other ones, older ones. But the feel of this place is different. We drove slowly down a narrow gravel road, past stones that look so fragile and tilted I felt like just passing by was  putting them in jeopardy and was praying that there would be a wide spot to turn around at the end.  Even on such a hot day and near a busy road, that place is shady and quiet and has a feel to it that's all its own. And the inscriptions are just amazing. 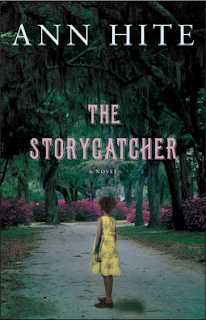 Set in North Carolina in the 1930s, this is a creepy story of haints  who want their stories told and secrets revealed.  It spans several years and is told by several different women, so even though the chapter headings clearly indicate who is speaking and what year it is, I found it easy to get confused.

I was fascinated by the charm quilt that Faith made, "stealing" the image from a gravestone by making a crayon rubbing on a length of silk she found in the back of her mother's closet. It had buttons and embroidery and a lock of hair hidden in a secret pocket. I could never quite form a clear picture of it, but boy I'd love to see it!

The Storycatcher is more complex than most of the ghost stories I've read. There's a lot going on here and it all weaves together.

Disclosure -- the publisher provided me with an electronic ARC.
Posted by Michelle at 4:00 AM

It sounds good. I'll have to add it to my list.

That sounds like such an interesting book. I like to visit old graveyards also. I need to see if I can find this book in our public library or BN or somewhere....

Ooooh--your description of the cemetery sounded like the beginning of a novel--I think you should write a book! I am still slogging through the Game of Thrones books and I am finally on book five--whew!