What are we scared of?

What Was I Scared Of? from The Sneetches and Other Stories by Dr. Seuss

is my absolute favorite picture book. It's got a pair of empty green pants that ride a bike and row a boat...and prickly black Brickel bushes and the most amazing color combination. I think I might need an applique quilt based on this book... 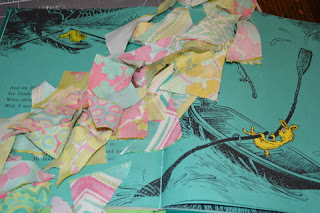 Lots of quilters seem to be scared of half square triangles and willing to make all sorts of contortions to avoid those scary bias edges.

I'm working on a tutorial with about a hundred half-square triangles and I just know that someone is going to scold me for the way I do them -- the same way I've been scolded in the past for cutting individual squares instead of using quick strip piecing methods.

I cut the squares because I don't want the prints falling in the same combination every time.  And I do my triangles the way I do them because I think it's easier to make the half square triangle units that way.

I cut squares in half to make two triangles and sew the triangles together. For me, that's a lot faster  than drawing a line from corner to corner of each square, then sewing a quarter inch on each side of the line, then cutting. (I've done it that way, too.)

Back in high school Home Ec, I made a matching blouse and skirt out of red and black plaid cotton. The teacher suggested that the square patch pockets would look nicer if I cut them on the bias. So I did. She did warn me to watch out for the stretchy edges, but they were no big deal.

After a gathered skirt with a button and zipper, and the yoke and collar and more buttons on the blouse -- not to mention matching plaids! -- those bias edges weren't that scary. Maybe that's because I'd never a bunch of warnings about bias edges.

How do you make your half square triangles?  Have you tried just cutting them and sewing them together?
Posted by Michelle at 4:00 AM

I've used thangles, triangle paper, cutting each triangle separately, using the Angler instead of drawing the center line, and making them from squares.

My favorite method is using Eleanor Burn's Quilt in a Day triangle square up ruler. It makes 8 at a time, and they are accurate. The down side is you have to do some trimming at the end, which I am willing to do for accuracy.

I think you should use whatever method gives you the most accuracy.

I am an Easy Angle girl. Bonnie Hunter hooked me some time ago.

Hooray for you. Cut accurately, sew accurately, you don't need all those other gimmicks. You would love Sally Collins. She makes her fabulous quilts with just a few basic tools. Everything else is straight sewing. No tricks. Hooray!

I too have tried many different ways to make HST, but recently have used the Easy Angler ruler that Bonnie H uses. I am working on Easy Street and this ruler was used throughout the quilt. I'm not very accurate with sewing 1/4" on either side of a drawn line either. I like to change piece, so cutting and sewing them separately is my first go to.

I generally use squares and sew 2 lines. I don't mind having 2 HSTs that are the same. I do want to try the Easy Angle next time I'm not doing totally scrappy ones though. I like to add the extra 1/8" though and trim them, I'd rather not have to fight with them during block assembly!

After years of trying every method out there, I finally settled on the same straight forward method that you use. I find that my HST are a lot more accurate that way and I don't avoid then anymore.