I've seen two stories on the nightly news lately about bees swarming neighborhoods and how terrifying it was for local residents. One woman had a mass of bees on her decorative flag.
Something like this... 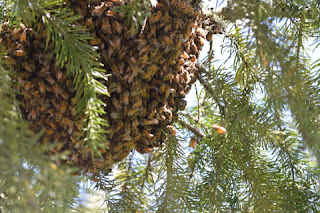 The only terrifying thing about the mass in this picture was that they're our bees and had decided, for whatever reason bees decide to do what they do, to leave their hive.  If hubby hadn't been out tinkering with one of the cars and heard the louder than usual buzzing, we would have lost them for good.
Instead, we suited up, cut down the branch they were hanging from, and shook their annoying little bee butts back into an empty hive box. They're at the far end of the yard now, and hopefully they're happy with their new residence. 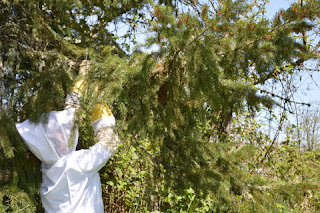 See where Hubby is standing? The swarm is that darkish shape directly to the right of his arm... and I was standing in that same spot a few seconds later, sawing through the last of the branch so that he could lower it into the box. Did I mention that I don't have gloves for my suit?  (Teenage Son has been boasting that he's taller than me now, but he stopped that as soon as I told him that being taller meant that he got to help cut the next swarm out of the trees.)
I wish I'd taken time to learn how to shoot video with my new camera, because this was definitely an experience worth filming. All went well and neither of us got stung. Swarming bees don't have a hive to defend and have gorged themselves with honey before leaving their old hive, so they're at their gentlest. If you have allergies or if you live in an area with Africanized bees, I'm not going to argue with you.  But for the rest of us, swarms aren't anything to be afraid of.
When a hive swarms, the queen leaves the hive along with half of the bees, leaving behind the rest of the bees and a new queen.  Bee populations are dropping dramatically due to pesticides and Colony Collapse.  There are beekeepers out there who would be thrilled to come capture a swarm and set them up in a new home. Google "swarm list" along with your city and state and you should be able to find a whole list of them.

Our son and daughter just had a swarm take up residence in a sprinkler box in their yard. They called a whole list of keepers and none would come out for under $200 to capture them. I don't know why they charge so much when THEY are getting the swarm for free.

Glad you found your bees before they flew away for good and glad your bees are healthy. We do our best around here to provide good plants for bees to keep them happy, right now they are loving our lavender and wallflowers.
I also had the experience of having trouble finding a bee keeper to come out and move a swarm at a reasonable price but did eventually find someone, here's the post about our bee adventure: http://dogwoodlanerambles.blogspot.com/2012/06/babies-bees.html