Can we all just agree that taking flattering pictures of large shawls, especially asymmetrical ones, is difficult? This one has fantastic texture and looks much better in real life. 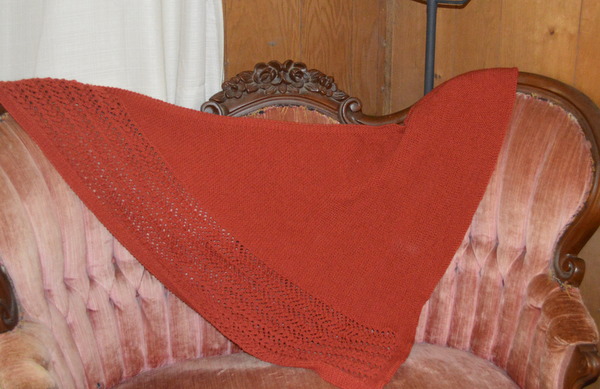 The pattern is Halfway Home and it's free on the Universal Yarns website. There's a simple lace panel that you can knit from memory once you're past the increases that form the shawl's point and the rest is garter stitch.

I could happily knit a lot more of these mostly garter stitch shawls. They're perfect for working on in the evening while the family watches television. (Anyone got a Hulu or Netflix recommendation for us once we're done with the original Lost in Space?) 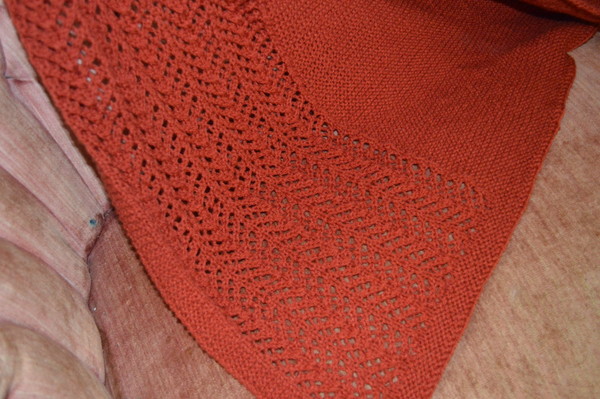 This is definitely a stash-dived project. I had three skeins of Red Heart Designer Sport that I bought at a Michael's clearance sale back in 2008. There must've been a plan for it at the time, but whatever that might've been was long forgotten....along with the yarn itself. That was tucked into one of the darkest corners of my stash.

But it made the best shawl! I'd planned on donating this one, but now I'm having second thoughts and feeling guilty about that...even though I know there will be lots more shawls to donate and to keep.
Posted by Michelle at 4:00 AM

Lovely shawl! I recommend the Canadian TV show "Heartland" if you haven't watched it. Also, I just watched "The Guernsey Potato Peel Pie Book Club" (if that's not correct, it's close) and it was so good. Three of the actresses from Downton Abbey are in it. Also, I love the movie "Brooklyn." That's it for recommendations from me. Hard to find good shows these days!