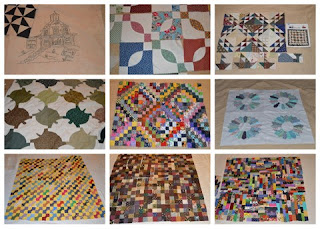 Judy challenged us to post a list of our UFOs. I started with the excruciatingly complete list. There were thirty-two projects on it when I made it at the beginning of 2012, and it really was excruciating. Then I pared it down a bit.

Do I really need to count the block swap I did with a pregnancy list when my now sixteen year old was an infant? I'm not even sure if I want to  assemble those into a quilt or scrapbook them. Not to mention that I haven't seen them in the seven years since we moved... I crossed that one off the list.

And do I need to count every late night experiment? Just because I pulled some scraps out and made a few blocks, I don't think I need to carry around the burden of finishing the quilt.

What if I pulled together some pink and green fabric to make a quilt, cut a few pieces,  and then changed my mind before I actually assembled any blocks?

After crossing off the late night experiments and the projects that got kitted up but not actually started, I was left with these. These are the ones I'm working on, that I have plans of actually finishing --

Twenty-four UFOs. I don't think that's bad, not considering the number of quilts I've finished over the seven years that I've built up this list. And there is only one that I feel a little guilty about, because I bought the kit and cut the pieces and then decided that I didn't like it as much as I thought I had.

Do you feel guilty about your UFOs?

yes, yes, i have guilt... up on top of the bookshelf - there are tops, waiting... and on the top shelves, bins with UFOs... retirement projects, every one of them!!! LOL

Yes and no. I have bins with fabric pulls and patterns that may or may not count as UFOs? Then I have actual projects that I have started and will finish, maybe even busting up some of the previously mentioned fabric pulls. I really need to decide if I'm going to learn to free motion quilt my tops on my domestic machine or if I'm going to create a budget for a machine quilter or take a class at a local long arm quilter's and do them myself. Meanwhile, I love sitting down to sew. So -- banish the guilt!

Only occasionally. I try not to have too many on the go at any one time… I keep my WIPs and UFOs to less than 10, but that's as much a storage/budget issue as it is a guilt/creativity one.

Nope, I don't feel guilt about my quilting -- which may explain my list. Single blocks to "see" are tossed in my orphan block bin for "someday". Good work on deciding what you are really going to finish.

LOL, your comments are exactly why I have not compiled a list of my UFOs!! LOL, most are UFOs because I have lost interest and I will feel guilty that they are not done!!

Nope, no guilt here. If I didn't feel like finishing something, I just moved it to a new home. I did include all my crazy idea starts. Great job on such a short list.

You made me literally laugh out loud about the pregnancy blocks! You've accomplished a lot and should be proud :)

love the pics, I HAVE a list but really should take current pics of my UFOs I think just touching them etc would be a good motivator

Well at least you know you will always have something to do to keep you out of mischief :0)

I have some guilt, like the one I made for my husband that just needs quilted and bound. Of course, he helps with the guilt! :)

I used to have guilt when I wasn't finishing anything... now I have less guilt and more anticipation of freeing up space and looking forward to having less "baggage" & more creativity.