the button with the little red dot

I've been driving our minivan for six  or seven years now. Hubby could tell you exactly what month we bought it in, but I'm just guessing based on the model year. Whatever the dates are, I spend an insane amount of time in the thing.
So why didn't I  ever notice this button with the little red dot? 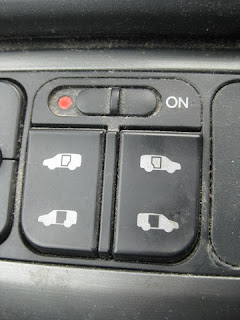 I stopped by my grandparents' last week to pick up a book. The plan was for me to jump out and grab it and we'd be on our way....like my boys were actually going to stay in their seats when all four grandparents were in sight...

I should know better. Just like I should know that if there are that many witnesses something is going to happen. Like both automatic doors on the van refusing to work after I finally got my youngest two to stop hanging off of the handles.

The van was unlocked. We tried the inside handles, the outside handles, the buttons on the remote, and the buttons next to the steering wheel. The only thing that did work was to physically wrestle the doors open and closed -- and even then, they'd open just far enough to let a small child slip through. I was just figuring out how to even try to explain this one to their father when Teenage Son came to the rescue.

That button with the red dot? If you switch it to the "off" position, it kills the power to the sliding doors.  I sure wish I'd known that the day I took the kids to the coast by myself and spent half an hour in the parking lot of the aquarium trying to get one of those stupid doors to stop hanging up on an invisible piece of dust that was tripping the safety sensors!

Do you know what all of the buttons in your car do?

I'm linking up to WFMW at We are THAT Family and How to Tuesday.
Posted by Michelle at 4:00 AM

Hahaha, too funny! My car has all sorts of electronic stuff that I have no clue what to do with. I just get in and drive..that works for me!

Too Funny! Our mystery button in our car was the one that lets the lights turn on when you open the doors. Took us forever to figure out why it kept changing! Finally figured out my hubs was doing it when her used the lights! Very mysterious when it happens!

That's funny! I'm sure there are lots of buttons in my car that I have no idea what they do - as welll as lots of buttons on the television remote. Who has time to learn all that stuff?

ROFL....oh sorry, probably wasn't funny at the time LOL. My car is so old it doesn't have any buttons except on the radio. When I borrowed my sister's 2012 Elantra it took me a half an hour just to get out of the driveway....too many buttons and what the heck is this thing of no car key???!!!

That is so funny, but I know at the time it was not for you. I remember standing in a parking lot taking to frieds after a quilt meeting and when I went back to the van a dog was sitting in the driver sit. We had a time getting him out.

This would have totally happened to me!! Sorry it had to happen to you and no...I don't even know how to use the cruise control.