This one just kind of happened. I was looking through a quilting magazine and liked the pattern and realized that I probably had suitable fabric and just might have the skills to do the piecing...And two afternoons later I had the top all finished except for the applique.
There are supposed to be flowers in the baskets and filling up that white border. The top's been sitting since February 2008, waiting patiently for me to decide what to do about that yawning expanse of white space. 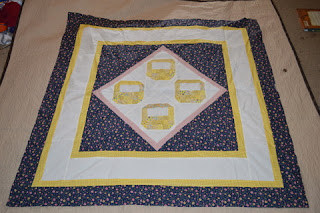 I really thought about just giving it away, but it has a fun back story. So now I'm thinking of cutting a bunch of flowers with my Rose of Sharon die and doing something in the borders like Jo's Bubbly Quilt. I'd fuse the flowers in place first, because I'd want to be a little choosy about the placement.
I do like the basket blocks. If the pattern ever surfaces again, I can see myself making more of them. 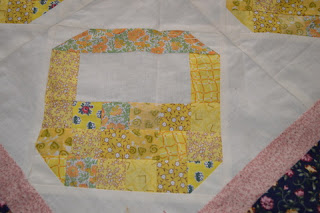 Judy is planning a UFO Parade on April 15, and I'm pulling my UFOs together for my entry.
Posted by Michelle at 4:00 AM

I think the Rose of Sharon die would be perfect. The scrappy pieced baskets are cute too. So how many UFO's are lurking??

I love these pieced baskets. :) If you find the pattern, I would love to know where to find it. :)

I'm looking forward to seeing what you end up doing with these baskets, there are lots of white spaces for some great quilting too :0)