skipping Black Friday (and showing off a finish) 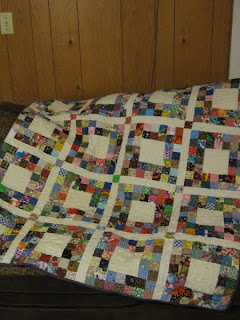 I started this quilt early in 2008, probably not long after I started my first "real" quilt top. There was a smaller experiment before that one, but I don't really count that one. The Plan was to make a big quilt. I cut some squares, made some blocks, and then a bunch of other quilts happened.

And somehow along the way the plan changed. I convinced myself that the blocks I'd already pieced wouldn't work with the scraps I've got now. I didn't like the muslin I'd used for the block centers, and didn't have any more of it to make more that would match. I wasn't going to take the blocks apart and put them back together -- why do that when I could just make a fresh batch?

I assembled the blocks into a top. And I let them sit. They'd still be sitting if I hadn't gone looking for a project to finish this week. Of course now that they're quilted, I'm back to wanting a bed-size version. I really do love those tiny squares of fabric -- they finish to one and a half inches.

Most years, I'd have been out standing in line long before dawn, after Black Friday deals. This year, I was more excited about the second Orca Bay clue. And Bonnie did not disappoint!

I had a feeling the strings would make an appearance soon -- and here they are! Itty bitty strings which actually look a lot of fun to piece.
Posted by Michelle at 11:13 AM

your top looks nice, I downloaded my orca clues too, never done string piecing, so we'll see how it goes.

Your finish is again inspiring.Beautiful old timey feel to this quilt, its a keeper I'm sure!

I must ask, what is Black Friday?

I love the newest quilt.
Have fun working on the mystery. I chose not to do it this time.

WOW...you are on such a roll Michelle. I love this one too. You always have the best scraps!

Michelle, this a great quilt! Love all the colors with the white.

Hi! Greetings from Finland! Your quilts are so fantastic! It's so nice to find other quilters all around the world! :)