Late last night, I was sewing bindings and watching old television shows on Netflix, keeping an eye on my cell phone's clock to make sure that I didn't stay up too late. With the time change, I figured that as long as I went to bed by two, I'd get enough sleep before I had to get up at seven. And then somehow or other, I completely missed the part when the clock jumped back an hour and wound up going to bed an hour later than I meant to.

But I got the binding on the mouse quilt (Baby Quilt Binge #2) I'm still not wild about that wide border, but the quilting makes up for it. 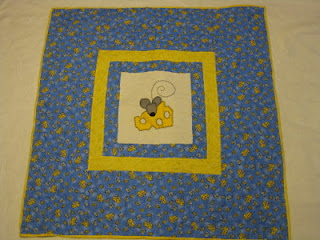 This morning I pulled out my isoscoles triangle die and some cotton yardage that I bought last January and started making kaleidoscope blocks. 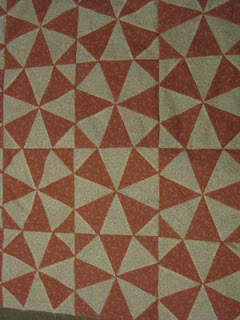 I love the illusion of overlapping curves, maybe more than I love real pieced curves. I definitely won't be up as late tonight, but hopefully I'll be able to get this one quilted and bound. After that, I've got one more top to quilt and the third blue sheet quilt...and then I'd better think of something new to start.
Posted by Michelle at 5:45 PM

The new triangle blocks are great. I like the curve like optical illusion. It reminds me of winding ways but without the trouble of curve piecing. Very effective.

looks good this far..... I do agree with the border on the mouse, BUT can you add some mor applique later maybe?? great kaleidoscope quilt too, I just made a top with that Go! die recently :-)

this kaleidescope block is so amazing....i love the look of it~

WOW - you are a quilting/sewing machine (from a morning person here)! Love the kaleidoscope - may have to see about getting that die. Here's to another productive day!