I don't know what my husband brought home from work, but it involves lots of snot and coughing and sinus pressure and wobbliness and it's led to some of the strangest discussions with my sons. Mostly of the "this is not the flu but even if you actually did have the flu you'd recover and be absolutely fine" variety. There was also  the teenager who said he didn't  want any cold medicine because it wouldn't fix his stuffy nose or sore through or cough. I handed him the box and had him read it. This is the kid who never admits he's sick, he just stuffs a wad of tissues into his pocket and soldiers on.

Now I'm wondering if the reason our homeschooled boys so rarely get sick is that there's nothing to be gained or lost from it aside from occasionally quarantining ourselves so we don't share the annoyance with other people. If they feel like lying down will help, they lie down. Once they feel better they get up and get on with their day. There's none of that "if you're too sick for school you're too sick to do anything but stare at the walls" nonsense. It also takes a lot less energy to head into the living room to do some reading and math problems than it would to get up, get dressed and wait for the bus....all before even getting to school.

My own energy level is picking up a bit so I'm hoping to work on this later today. 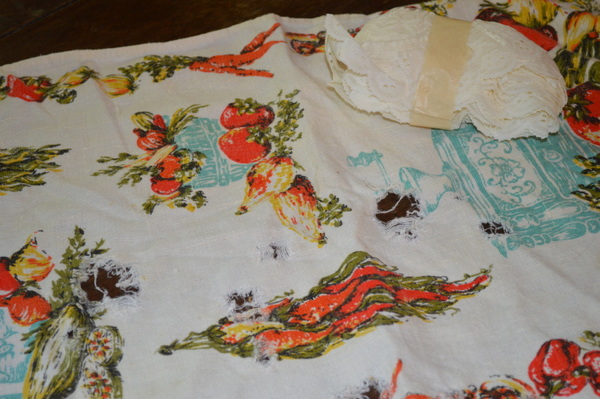 The plan is to patch those gaping holes with some eyelet lace, with buttonhole stitching around it.
Posted by Michelle at 11:23 AM