{Estate Sale Temptations} The Ship in the Kitchen

I kind of want a picture of a sailing ship in my own kitchen.... 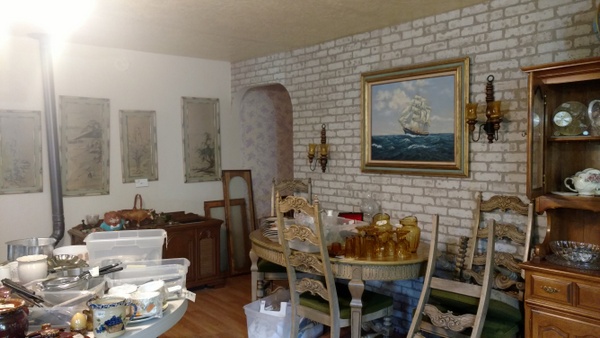 I don't know what it was about this house that we visited during an estate sale last weekend, but I absolutely loved it. The structural issues were obvious and I know it would be totally impractical to live in, but it felt welcoming and the massive kitchen was its absolute best feature.

I only took the one picture because it was crowded, but the whole house was like that. Lots and lots and lots of clutter, but the floor plan was kind of amazing. And I have to keep reminding myself that I had a yellow kitchen for almost ten years and hated it for the entire time...but maybe mine was the wrong shade of yellow?

Earlier in the week, I found this at one of the local thrift shops and convinced myself to leave it behind. 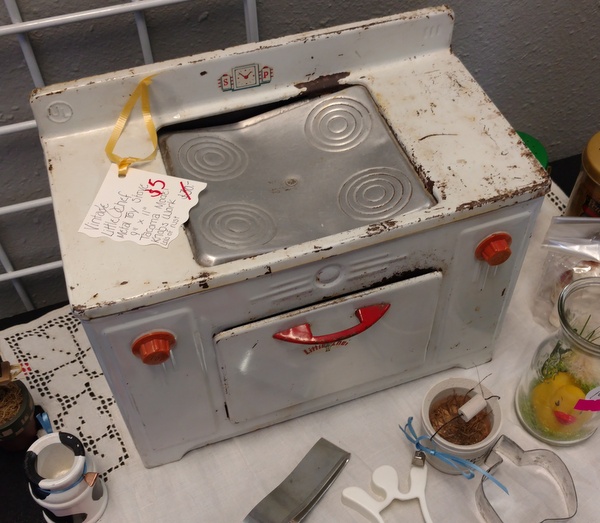 I've been wanting a little metal stove like this forever and ever (to replace one I had as a kid) and this one was only five dollars. The inside was totally rusted out and the top was bent out of shape so I  convinced myself that there will be another one. Or maybe there won't.

I don't absolutely need a little metal stove....
Posted by Michelle at 4:00 AM

Oh my. Couldn't see any yellow in that estate sale kitchen. Would have liked to see some as I'm thinking of painting my kitchen walls yellow.
That little metal stove is darling. I'm imagining the rusted-out interior to stop myself from hoping I can find one of my own. Thanks for the new mind-task.
It is so fun to see your thrift shopping. Thank you for all your posts. I like variety!

That's another part of estate sales that I love...seeing the inside of the houses! The architecture, woodwork and details in older homes are so cozy as compared to the "boxes" that keeping popping up all over our area. My Grandmom had a yellow kitchen...and she was always happy! :-) I'm thinking that if you like yellow (but fear you might not like the shade....try a soft butter yellow.
Built in bookcases....and apron sinks....ahhhhh....now you have me daydreaming of houses...lol!