The Peaches are Better Now

On Thursday I made the drive up to Acorn and Threads and spent six solid hours stitching with my friends. I took breaks to wander around the shop and breaks to listen to the conversation but mostly  I stitched a jar full of peaches. 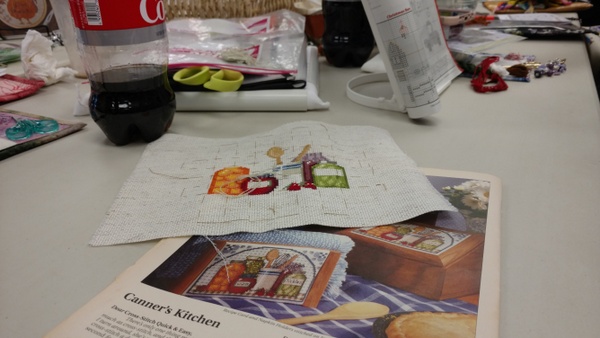 A couple of weeks ago I posted about the problem I'd run into with Canner's Kitchen. It was the first stitching I'd done in ages and I'd made a lot of progress and then I realized that a big chunk of what I'd done was wrong and I didn't know how to fix it. I was STUCK.

Some of us pulled out different shades of orange and compared them to the photograph and made guesses about whether those stitches should be darker or lighter than the other existing stitches. Then Michelle Garrette looked at the green skein and wondered if 772 was just a typo for 722 and we compared that shade of peachy orange to the other possibilities we'd chosen. It was so close that it just HAD to be the right color. 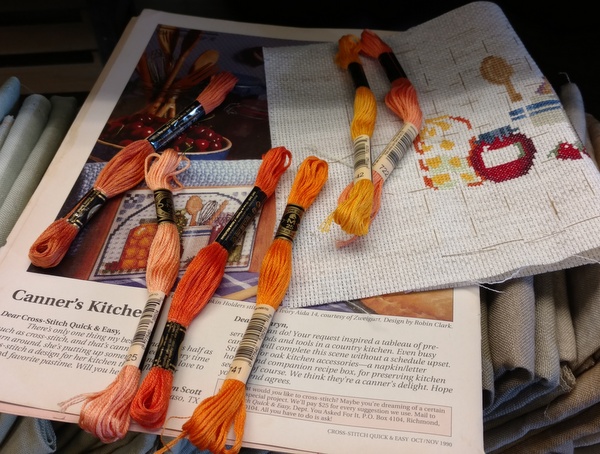 I sat down and picked out all of those green stitches and started replacing them with the new color and filling in the space around them. That can't not be the right color. Or if it is, I don't care because it's worlds better then the green. 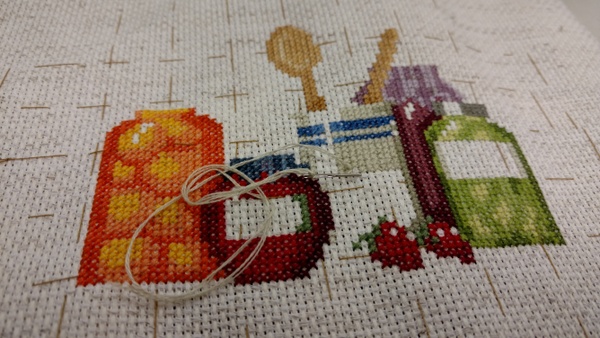 If you're wondering how I got myself into so much trouble, it's because of my other project with lots of shading, Ripe Apples. That one has all kinds of colors that don't make any sense until they're stitched. If I'd been looking at the picture on the opposite page instead of just blindly following the chart, I would've seen that something was wrong. But I didn't.

When you think about it, it's amazing that I so rarely run into problems with these old magazines.
Posted by Michelle at 4:00 AM