{Thrift Shop Temptations} I'm Going to Wind up With One of These...

After seeing all sorts of posts about "vomit clocks" I finally found one in a second hand shop. 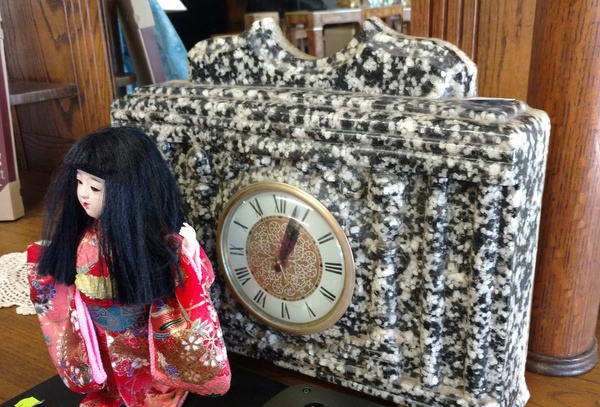 As far as they go, this one is kind of nondescript. It doesn't have river rocks, or seashells, or unidentifiable blobs of stuff.

I'm kind of starting to want one, but it's going to have to have interesting bits of stuff in it. When I was little, my grandparents bought a mid-century house that had a resin toilet seat filled with bottle caps and matchbooks and little tiny crabs. If it was sharp and scary to sit on, it was incorporated into that toilet seat. I can't tell you how much I wish I had a picture to share with you.

Or how much I wish that I had the actual toilet seat. With my house and my boys it would be absolutely perfect. If I'd been just a bit older when they sold that house, maybe I'd have thought to ask for it. I'm sure the new owners would have been just as happy with something new and nondescript.
Posted by Michelle at 4:00 AM

That is actually a nice vomit clock. There is a subgroup on Facebook that post specifically about those what I think are usually ugly clocks.