I've always enjoyed reading about the 1920s. Deco Dames, Demon Rum and Death has the jazz age, and a seance, and a ghost bride...so how was I not going to read it? Fast paced and peppered with era slang, the plot doesn't stop moving until the end. Did I mention that it's also got grave robbers and KKK members and organized crime? Society reporter Jazz Cross is doing all she can to sort it all out.

This is the fifth book in the series and I probably would've been better at keeping the characters straight in my head if I'd started with the first. (The author and Great Escapes Book Tours provided me with copies, but I haven't had time to read the others yet.) 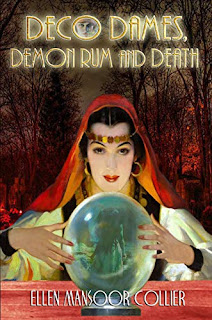 When young Galveston Gazette society reporter Jazz Cross hears rumors of grave robbers at the Broadway Cemetery, she and photographer Nathan Blaine investigate, hoping to land a scoop. The newshawks witness meetings held by clandestine gangs and enlist the help of her beau, Prohibition Agent James Burton, who attempts to catch the elusive culprits red-handed.
Meanwhile, the supernatural craze takes Galveston by storm, and Jazz is assigned to profile the society set’s favorite fortune teller, Madame Farushka. Sightings of a ghost bride haunting the Hotel Galvez intrigue Jazz, who sets up a Ouija board reading and séance with the spiritualist. Did the bride-to-be drown herself—or was she murdered?
Luckily, Sammy Cook, her black-sheep half-brother, has escaped the Downtown Gang and now acts as the maître d’ for the Hollywood Dinner Club, owned by rival Beach Gang leaders. During a booze bust, the Downtown Gang’s mob boss, Johnny Jack Nounes, is caught and Jazz worries: will Sammy be forced to testify against his former boss? Worse, when a mystery man turns up dead, Sammy is framed for murder and Jazz must solve both murders and help clear Sammy’s name.
As the turf war between rival gangs rages on, Jazz relies on her wits and moxie to rescue her brother and her friends before the Downtown Gang exacts its revenge.

Disclosures -- I was provided with a review copy in exchange for the tour post. The giveaway is being run by Great Escape Book Tours, not me.

Thanks for featuring me and Jazz today! Glad you enjoyed DECO DAMES~ hope you can read the rest of the series. Ellen

This is a great series! I've read all five books and loved them all!

Thanks for featuring DECO DAMES, but the Goodreads button has the wrong link--IDK who added this but it's not active. Please correct the link: https://www.goodreads.com/book/show/45174861-deco-dames-demon-rum-and-death