Moab or Sedona? In Sedona this time! 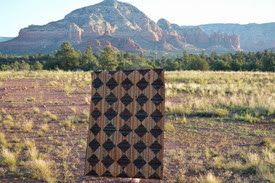 The Moab or Sedona quilt finally made it to Sedona. It could've made it to Moab back in May, but I didn't know that we were going to wind up there ourselves so I didn't pack it. If I'd had it when we were out doing the Shaefer Trail drive I could've gotten some spectacular pictures.

But I'm not sure if it matters. Or am I the only one who thinks this picture looks like a very poor attempt at Photoshopping? I took it the very last morning as we were packing the Suburban -- this is the view from the parking lot of the time share.

I'm assuming that you don't want to hear my complaints about the National Park closures. Any other trip, we would've cancelled as soon as we even knew it was a possibility, but our room was booked and we'd used our timeshare points, so we headed South and hoped for the best. And visited as many monuments as we could over the first two days we were there. For my family, it wasn't that awful. The kids have seen the Grand Canyon and Montezuma's Castle and the rest.  It wasn't a once in a lifetime trip for us.  But I feel for people who've traveled from overseas or were planning weddings...

We found plenty of other things to do. Homolovi Ruins is a state park. Everywhere you look along the short trail, there are pottery shards lying on the ground. These were arranged by someone else. Resisting the urge to touch them is hard, but I managed. Barely. 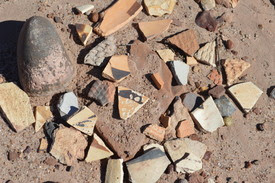 And remember the Apache Death Cave that  I found out about this spring when I was putting together that post about quirky travel destinations? We found it.

Back before we had kids, I would've probably followed Hubby across that bridge. But these days I'm a lot more chicken (not to mention heavier) and there was no way I was setting foot on those beams. To be fair, they look worse in the picture than they did at the time. 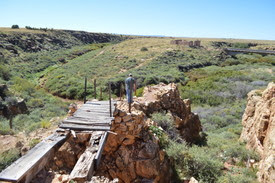 But I was seriously tempted by this one. If he hadn't just told Teenage Son to stay off of it, I would've gone across to get a peek into the opening on the other end. From down below, it looks a lot more stable than it does from this view. 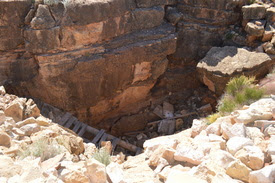 We clambered around and watched out for snakes and took lots of pictures. I'd found an old magazine article about the cave while I was looking for directions earlier that morning, but didn't have time to read it in the resort lobby and haven't had time in the day and a half that we've been back home.

And now that I am back here I've got quilts to work on. Halloween is coming fast and I've got stuff I want to get done while it's still October!

Your quilt looks at home in this setting. I think we could keep our parks open with the salaries of the nonworking politicians!