Ever try to make a birthday cake shaped like a skull?

Even with a cake pan that's shaped like a skull, it isn't as easy as it sounds. And now I remember why it's been so many years since I last tried to bake a birthday cake instead of just grabbing one of those big  chocolate ones at Costco. Or a strawberry cheesecake, depending on whose birthday it is. 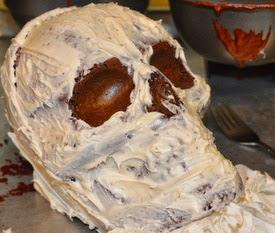 When I do this again, which I will since I've got both the pan and a little boy with a late October birthday, I'll use wooden skewers to try to keep the front from sliding off of the back. I'll also dust it with powdered sugar instead of trying to frost it.

We've all got different skills in our secret Mommy arsenals. Baking attractive birthday cakes is obviously not one of mine. And neither is making up animal costumes on the fly, at least not based on the comments from this morning's post. Two of you had it right.

But maybe this will work out....last year my youngest got annoyed every time someone recognized what he was and called him Mario. This year, he won't have that problem!
Posted by Michelle at 6:09 PM

I have the worst luck trying to frost cakes, but I think this skull looks perfectly gruesome--as it should!!

Holy cow! I have no idea where you got that cake pan but I want one right now. My family would absolutely flip for that cake. My son and DIL had Dia de la Muerta skeletons dancing all over their wedding cake 20 years ago and it was not Halloween so you get where I'm coming from. I thought the rest of the family would faint when they saw it, lol. To be honest I wasn't best pleased at the time but I'm used to it/them now. Anyway, awesome cake if you ask me.