{Yarn Along} The Collector

These are the socks I worked on during the drive to Arizona and the drive home, finishing the cuff of the first sock and the toe and foot of the second one. I'm pretty sure the yarn is Opal, but the label is long gone. 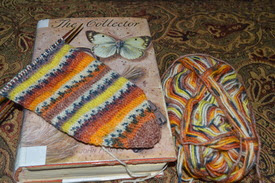 Hubby was flipping channels one night and stumbled across a movie about a man keeping a woman locked in the cellar. The whole thing was very 1960s and the two of them seemed to be getting along and we wound up watching to the end just to figure out what it was. (Satellite TV has spoiled us over the years, with the ability to click and see what you're watching and what year it was made and maybe even who's in it.)

It turned out to be The Collector, based on the book by John Fowles. The next morning, I was in the lobby of the resort, going online to reserve the book because I had to find out how the whole thing got started. Because the book is written in two sections -- first from the point of view of the abductor, then as the diary of his prisoner -- it chilled me a lot more than the movie did. (As awful as it sounds, I stopped sympathizing with Miranda as much once I got into her head a bit.)  It also surprised me that, even though this book is much tamer than the newer thrillers I've been reading lately, it packed so much more impact.

Ooo I love the way the yarn and pattern are working together! I remember seeing The Collector a while back and then reading the book- the book was much more intense!

I love Opal sock yarn. The colors are so Fall-like!

I love that sock yarn. Makes my feet warm just looking at it.

great socks!!I love old Hitchcock movies because they are full of suspense not gore like movies and thrillers of today. Have not seen that movie or read the book but I might