I am a lazy mother who buys her kids Halloween costumes at Walmart or Kmart or whoever still has something decent left on the shelf before we finally go shopping. I balance out that laziness by taking them trick or treating in a friend's neighborhood where the kids stay out insanely late and they get more candy in one night than I did in my entire childhood.

I got my share of candy, but the amount that my kids have brought home the past few years just staggers the imagination...

When I was little, my mother and grandmother made my costumes.  Like this one: 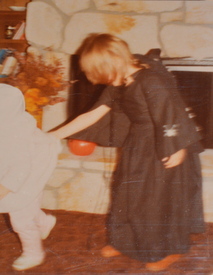 There was a cape, and a dress, and a separate little collar the buttoned at the back of the neck. After Halloween, my sister and I played dress-up in it. I thought it was long gone, but a few weeks ago, my mother found the cape in a drawer. 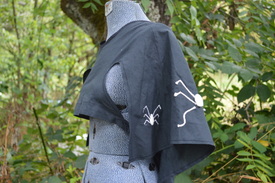 I can't believe that those cotton balls survived so many years. The outlines look like they're yarn -- that can't have been easy to do! 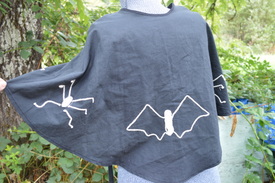 Does it help to balance it out that I've made an alligator scarf with three dimensional scales,  a shark hat with individual teeth, a Dead Fish Hat, a fireman hat, and a Weasly Sweater, and that one year I knit a turkey hat on the drive up to Thanksgiving dinner?

This post is linked to Time Travel Thursday, Treasure Hunt Thursday, Vintage Thingie Thursday, Share Your Cup, We Call it Olde, and Ivy and Elephants.

Obviously your grandmother enjoyed sewing the costumes and had more time to do them than the busy moms these days.

Hi Michelle,
I love those old houses. It's remarkable these are modular homes.
My girlfriend's first home in the early 90's was an Aladdin..has the metal tag on the wall with model #...date in the 1940's....a little ranch

I think your Halloween cape is wonderful! What a unique creation you have, so cool that you still have it after all this time. I wouldn't worry about the store-bought costumes for your kids, looks like you're making up for it with other projects and quilts. Thank you so much for sharing it at the We Call It Olde Link-Up, hope to see you there again! -Dawn @ We Call It Junkin.com

Time changes everything, even trick or treat. I think it is terrible.

Beautiful detail on the vintage costume. I always shopped the costumes on after Halloween clearance to stock the kids' dress up chest.

Oh how lucky to have found the costume after all this time. What a fun part of your childhood.

How awesome is it that she found that cape? What a treasure! And it doesn't matter whether they have homemade or store bought as long as they have fun!

Oh what a treasure! It is wonderful that she found it. Love the details on the cape! Thanks for sharing it with SYC.
hugs,
Jann