I'm not entirely happy with the way this costume turned out, but sometimes we mommies just do what we can. The neck of the shirt (which came from a purchased pattern) and the neck of the headpiece (which I made up on the fly)  had a big gap between them which I sort of fixed by adding a longer neck to the headpiece.

Does anyone think he looks like a possum? (Lie to me -- please!) 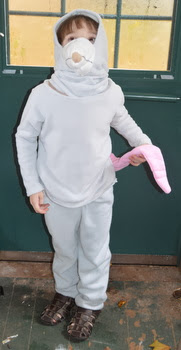 Now I remember why it's been so many years since I sewed a Halloween costume. They're way easier if you use a pattern...not to mention that it gives you someone else to blame if it doesn't look right. I still can't find the Teletubby costume, or even a picture of it, but I did find this picture of a costume that I'd totally repressed from my memory. 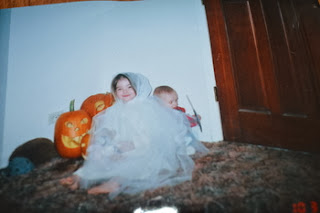 That little ghost costume was supposed to be "easy" and "no-sew," at least according to the instructions in Martha Stewart Living. They're available on their website now, in case anyone wants to ignore my warnings.  I had an awful time getting it together. If there had been more room in the budget, I would've tossed the whole thing and started over with something else.

Life is definitely easier this year, since two of my kids have opted to recycle store bought costumes from previous years, Teenage Girl has sewn her own, and all I've had to deal with was the possum.

This post is linked to I Gotta Try That, Sew Much Ado, Finish it Up Friday, Can I get a Whoop Whoop?, Get Crafting Friday, Pinworthy Projects, and Freedom Fridays, Wonderful at Home, and Inspired Friday.

Michelle, Whatever it is -- it is cute. Maybe from a profile shot it looks more possommy (I'm sure this is not a word). lol Straight on you can't see the snout too well. He'll have fun regardless. You are a good mommy just trying to make it.! I give you high marks for sure.

I think it looks like a possum. Those things give me the creeps.

Of course he looks like a possum -- look at that pink tail! (When my son was in kindergarten I made him a dinosaur costume. That was my first and last elaborate Halloween costume.)

Many years ago I made Power Ranger outfits for my twins! They started taking parts of it off as soon as we hit the door because it was hot. Oh the memories. Have a glass of wine and your costume will magically start to look like a possum.

LOL no no, he should be laying in the street with his tongue sticking out! Then he'll look more possum-like! I think it's pretty good though, maybe some fangs? They have wicked sharp teeth.

He looks like a possum. I have one that comes every evening to eat out of the cat dishes on the back step. He has a long nose and a pink tail too. Also has these pink toes (fingers). The costume is very good. Hope he had a wonderful time being a possum.

I've never seen a possum up close, but i think he looks like such a creature!