I'm exhausted, in the  best possible way. Yesterday consisted of almost seven hours in the air and two more in the car, not to mention the time we spent sitting waiting at the airport. I'd always sworn no force on this earth could get me onto a plane with my four kids, but this is the last year of our time share and there were rooms available in Hawaii....and the lure of waves and palm trees was stronger than my fear of flying.  (We bought our tickets shortly before the recent spate of horror stories hit the news.) 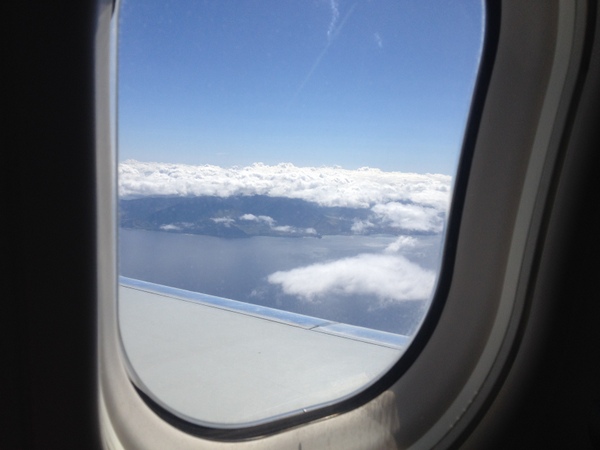 My twelve year old is not the best seat-mate. When the captain announced that they were suspending services so that the flight attendants could strap into their seats due to "clear air turbulence," he cheerfully told me that was what made the plane crash on the Weather Channel special they'd been watching the day before.

Maybe he was just doing a great job of distracting me from the fact that I couldn't get up and walk around nearly as often as my hematologist had recommended? Eventually I decided that since everyone else seemed to be ignoring the fasten seat belt sign with impunity I'd rather risk a scolding than a blood clot.

I'm just glad the flight to Kauai was completely uneventful or I'd have spent the whole twelves days worried about the flight back. It may be a while before I work up the nerve to get on another plane. 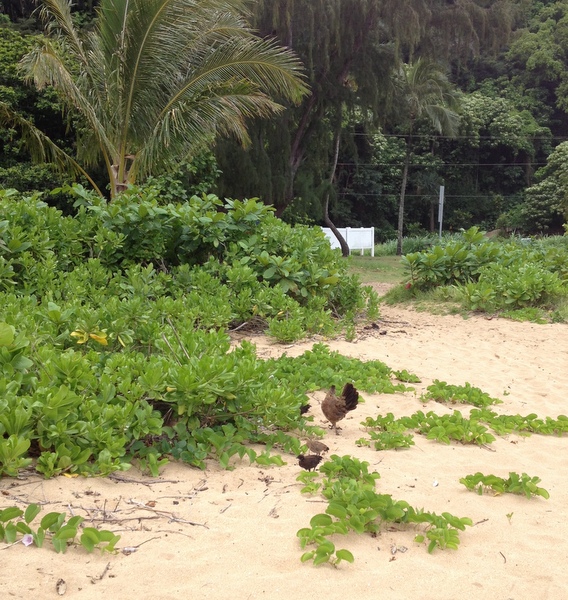 There are chickens everywhere, including the beach. At the place we stayed for the first four nights the roosters started making noise at four in the morning. Hawaiian roosters are a lot louder than the ones who live in my yard, even the one we've been keeping close to the house so he won't fight with the other rooster.  I don't know what makes  them so much more fascinating than my own birds, but they are. 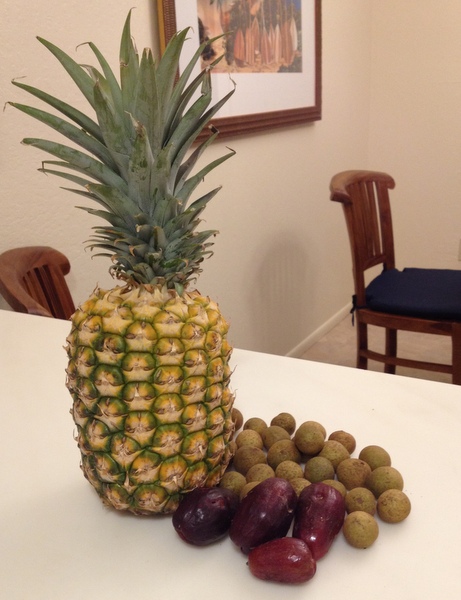 We stopped at a bunch of different farmer's markets, looking for new fruit to try. Those mystery fruits are longans, which are kind of similar to lychee, and mountain apples. We also tried eggfruit, which might have been better if I hadn't had two little boys standing there waiting for my reaction because they'd already tried it while I was in the other room, and a couple of other things I can't remember right now. One vendor told my sons that a particular fruit was for making antioxidant drinks and not eating, because it tasted like apple juice mixed with blue cheese...which of course meant they wanted to buy one. I vetoed that idea.

We rented snorkeling equipment and went out almost every day. I got into bed each night feeling like my body had spent time in a tumble dryer, but it was worth it. Thanks to the miracle of prescription lenses, I got to see a sea turtle, a moray eel, and an overwhelming number of pretty little fish. Hopefully I can get some pictures off of Teenage Son's GoPro, but I'm still trying to get everything downloaded from my phone and my camera and my husband's phone.

There are a lot of Hawaii posts coming up, but since it involves antiques and quilts and is all stuff I'd have posted about if I'd done it here at home, I hope you won't mind.

This was waiting for me when we got home: 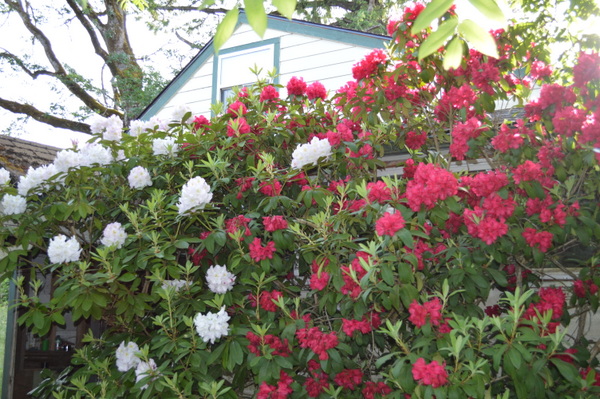 I hate rhododendrons. For the twelve years we've owned this house, I've been trying to get my husband to rip this thing out. Somehow I never realized that there are two separate plants, because for most of the year the thing is just ugly as sin.  But after seeing this, I think I've permanently lost that battle. Maybe I can still manage to get rid of the arborvitae...
Posted by Michelle at 6:45 PM

Oh no, don't get rid of the Rhodys! They don't grow here in California but are prolific in my home state of Washington.
Wish I were island hopping but still not in the cards for me ~ look forward to your Hawaii/quilt posts.

Goofin' Off Around the Block said...

I'm looking forward to your Hawaii posts. I love a good travel report...especially if it comes with recommendations of where to stay. --Andrea