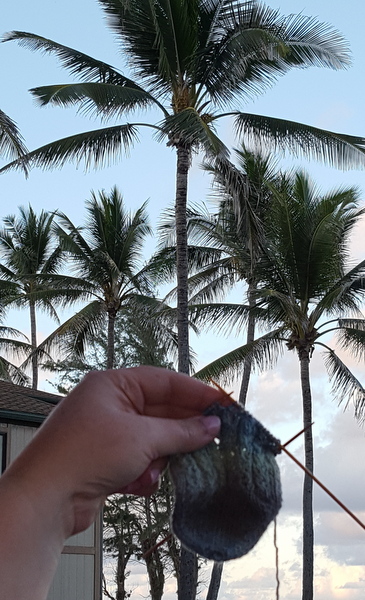 I really thought I'd come home from Hawaii with two finished pairs of socks. Neither needed much more knitting and if we're in one place with chairs and electric lights (as opposed to the tent) I usually do some knitting each evening. 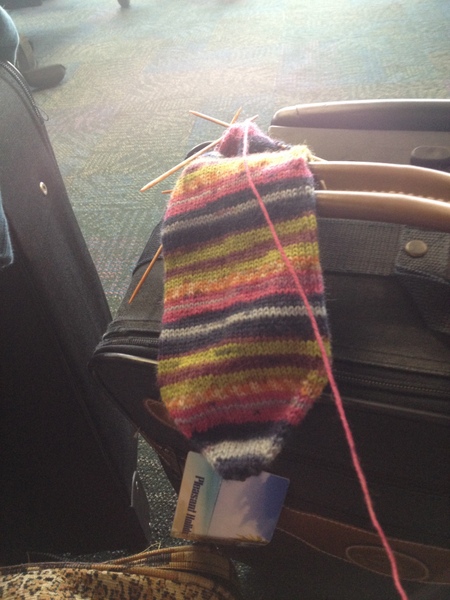 Nope. By the time we showered off the salt water each day, I was exhausted. I did a few rows of lace on this pair one morning and turned a heel while waiting for our planes to board at Lihue and Honolulu. If you want to start conversations with strangers in waiting rooms, use self striping sock yarn. From across the room, a woman asked me about it...and then wanted to know if my needles were metal because she tried to take a crochet hook onboard a few years ago and they made her check it. I looked it up in advance. Knitting needles are allowed. I also had the thinnest, most non-threatening bamboo sets I own.

I got more reading done than knitting, but the other half of the books will have to wait until I have more time to write about them.

The Ultimate Kauai Guidebook: Kauai Revealed was my favorite of the travel books I checked out from the library while we were planning our trip. It's got some detail about the history of the island and is written in a nice conversational tone. I bought the Kindle edition so that I'd have it on my phone for the trip. Having it with me at all times was helpful, but the format works much better in a physical book. I kept clicking to see something like the safety details of a beach and not being able to find my way back to where I'd just been. Another thing that irked me was the author's occasional insistence that something on the island was inferior to something on another island. I was where I was, with that option in front of me. So if the Kona coffee plantation is superior to the Kauai plantation, that doesn't help me. (And we were really happy with our tour of the plantation there on Kauai. For someone who'd never seen how coffee grows, it was pretty dang interesting. Not to mention that it was free and they gave lots and lots of samples.

I read most of Fantasticland by Mike Bockoven on the flight over. Imagine Lord of the Flies set in Disneyworld and you've got the general idea.  One of the world's most popular theme parks has been completely isolated by the flood waters of a hurricane. Emergency workers knew that the employees remaining in the park had emergency bunkers and supplies to last them for months, so they concentrated their efforts on more desperate areas. And things in the park went downhill fast. The novel is presented as non-fiction,  a collection of interviews with rescue workers and park employees, written years after the events that destroyed the park.  It's not exactly fast-paced, but it kept me reading steadily for hours. Events are described several times from multiple points of view, letting the reader piece together the details. Fantasticland isn't Disney, it's its own distinct park with its own history. (Which might explain why there are so many actual weapons around.) If you like horror novels, I highly recommend this one.

Disclosure -- I bought the books myself. All opinions are my own. This post is linked to iknead2knit, and  Frontier Dreams

What a beautiful backdrop, I'm not sure I'd have gotten any knitting done either!! The socks are looking good anyway, maybe they'll get more progress on them now that you're back home:)