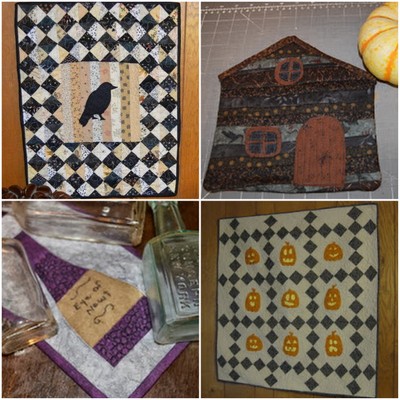 And this year I'm determined to get some of the nifty things I've been pinning made.

Because this is a quilt blog, I'll start out with the ghost mug rug and the Graveyard Quilting (no tutorial for that one, but it's amazing and worth a peek) and the Spooky Spider quilting tutorial. This spiderweb quilt is actually shaped like a spiderweb. The Three Witches is a wall quilt that combines piecing and embroidery.  These lace doily spiderwebs in embroidery hoops are delicate and airy.

I'm really liking this full size mummy, and there's probably room in the attic to store one for the eleven months a year that aren't October, but the idea of being that wrapped up in duct tape scares me more than any of the movies that we'll be watching over the next few weeks. (And I'm pretty sure that I can't wrap the kids in duct tape, either. There have to be some rules against that, don't there?) These little mummies are probably more my speed.

This is probably my favorite Halloween printable ever. It's subtle and optimistic.

I think we've got everything we'd need to make these DIY bloody hand print clings, except for maybe the nerve. Little child size hands would be super creepy -- and the food coloring will wash off after a while. It's what they get their hands on in the process that worries me.

These altered books with their dimensional covers would be a big hit -- especially if we made them on blank books for the boys to use for writing in. These printable paper covers are clever and would be less bulky to store.

I've been wanting to make some potion and poison bottles. I finally got my hands on some sand last year so that I could follow this Dust of the Dead tutorial, then I ran out of time.  These are filled with all kinds of neat stuff.   My oldest son has just discovered Lovecraft and Cthulu, so I'm sure he needs a thing in a jar. If we're going to do that, we'll probably need a man eating plant. Kind of starting to sound like the mouse and his cookie, isn't this?
Posted by Michelle at 4:00 AM