Ready for Some New Socks?

I'm busy working on the samples for Saturday's post. I was thinking that I couldn't show them in this post, but this knit along isn't a mystery.... 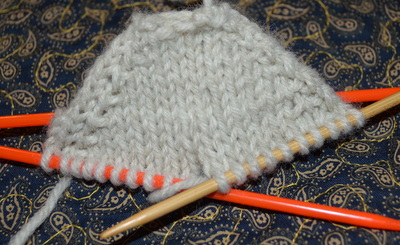 And I've been reading, book after book. This is one of those weeks where I've found lots of good ones to get lost in.

by Kathleen Ernst and it's the 6th Chloe Elefson mystery. (I'm new to this series, but the Little House element of the plot led me to jump right in.)   Hoping to confirm that an antique quilt was actually made by Laura Ingalls, Chloe carefully wraps it in archival tissue and takes it with her on a  tour of historic sites related to the author. The quilt's owner has asked her to determine which of the sites the potentially priceless artifact should be donated to. Chloe knows about the Ingalls family from the books and finds herself surrounded by fans who only care about the books, fans who only care about the television series, and academics who question who actually wrote the books and if Pa Ingalls was as noble a man as she always believed. She's dismayed to realize that Laura's real life childhood wasn't the fairy-tale that she imagined after reading the books. The book is set in 1983 and provides a lot of interesting reminders about how different things were then, let alone in Laura's time. I highly recommend this one, especially if you're into Little House on the Prairie.

A Beeline to Murder

by Meera Lester is the first title in the Henny Penny Farmette mystery series. Beekeeper Abigail Mackenzie leaves a swarm of bees and her other farm chores to rush some jars of her honey to her favorite pastry chef, who won't tolerate a late delivery. When she discovers Jean-Louis lying dead in his own kitchen, Abigail calls the police and begins investigating the scene herself. Because Abigail is a former police officer herself and currently works as a private investigator, she knows how to solve a murder. I enjoyed the book, but I wish there'd been a little less focus on the police department and more on the farmette. The author's descriptions of the swarming bees were so well done I could practically hear them buzzing.

What if the clothes you wore carried ghostly fragments of your soul, and somehow those fragments got transferred to one who wore those clothes next? That's part of the publisher's description of The Woman in the Movie Star Dress by Praveen Asthana. Genevieve works at Mel's Hollywood Clothing store, the place to buy dresses worn by the stars. Or supposedly worn by the stars...her employer is happy to encourage misunderstandings that will help sell a piece. After discovering that she can absorb some of the previous owner's qualities, she  begins to borrow dresses from the shop, hoping that they'll help her get what she wants. The book is darker and more serious than I expected and completely absorbing. There's more to it than just putting on a dress, and sometimes Genevieve doesn't know quite as much about the actresses she hopes to emulate as she thought she did.

I'm linking up to Yarn Along and Patchwork Times. The publishers provided me with ARCs.
Posted by Michelle at 4:00 AM

Thanks for the book recommendations! I've requested several from the library. I'm debating on the sock along still. We'll see!

I'm seriously thinking of the sock along. I will have to buy supplies online. If using the Red Heart Heart and Sole yarn would you go with size 1 or 2 needles. I haven't knit in a long while but seem to remember I was a 'tight' knitter. Any thoughts would be appreciated.