What's the biggest, clunkiest, most ridiculous thing you've hauled home from an estate sale? Prior to this, I think our record holder was an old trunk that Teenage Daughter had to have even though I had an absolutely identical one tucked away. It made perfect sense. Mine belonged to Great Grandma and she gets it over my dead body. She needed her own.

And I, apparently, needed an old shopping cart. 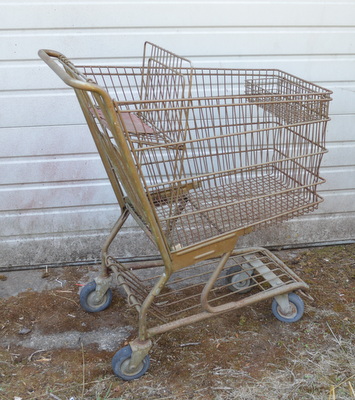 I've been wanting an old shopping cart for a while now, sometimes halfway wishing I'd kept one from the collection we'd amassed at out old house. The last driveway on a dead-end road, it was a dumping ground for stolen grocery carts. I'd call the stores and they'd tell me I could bring them back on my own. If we'd had a way to do it, I probably would have, but I wasn't going to figure out how to walk them back to their rightful owners and then get a couple of toddlers back to the house without a stroller. They were new and plastic and not half as neat as this one, which seems to have belonged to Safeway once upon a time. 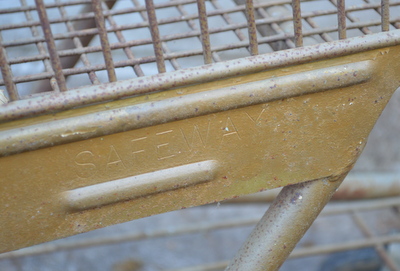 When I found it, it was hiding in the dusty shadows of an old barn at one of those wonderful/awful estate sales where nothing is priced and the family wants everything gone. While we were paying for the rest of our stuff, I asked how much they wanted for it and they told me to make an offer.

It's just about impossible to make an offer when you don't know if your husband will even let you drag the thing home, so I asked Hubby how much he'd let me spend on it and he offered five bucks.

He's better at making offers than I am. Either that, or he really didn't think they'd accept. A full size shopping cart will fit in the back of a Ford Expedition if the kids aren't with you. (If the kids had been with us, I'd have paid the five bucks and made a return trip without them.)

Because I'm completely smitten with this thing. It has a cute little basket. Anyone know what that would have been for? 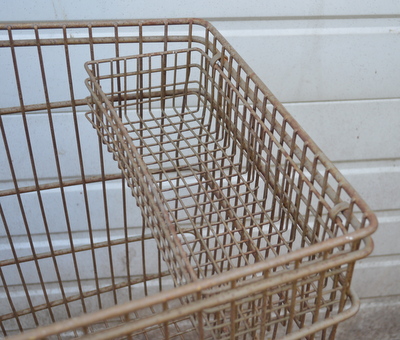 The story we were told is that the old guy dragged it into his garden and filled it with veggies, then rinsed them off right in the cart. I want to take it up to my sewing room and fill it with fabric, after I shift some furniture around. 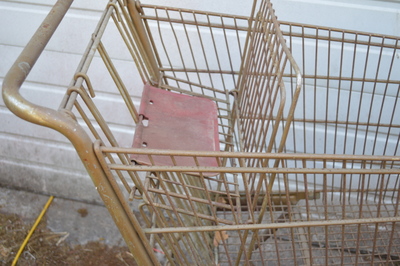 I'm not sure how we're going to get it up those stairs, but I've got two able bodied teens and I'm sure I can come up with a suitable bribe. 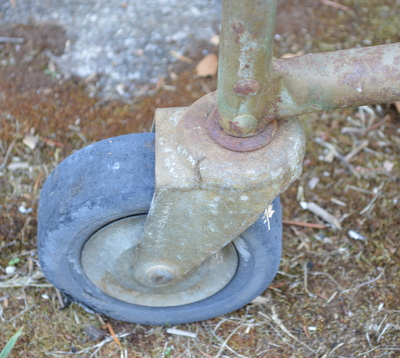 I'm linking up to Woman in Real Life, Let's Talk Vintage, Share Your Cup Thursday,
Posted by Michelle at 4:00 AM

I am jealous! I have wanted one for a long time, too!! What a great find!

I can't say that I have room for one in my sewing room but I am glad you worked it out with hubby! I'm thinking maybe the rack on top was to protect eggs? My MIL worked at Safeway back when the cashiers had to be trained to "feel" the buttons on the register in order to push the buttons without looking......they had little raised bumps on them...........this was way before they had scanners.....

The little basket in the front was for stuff you didn't want crushed; eggs, tomatoes, etc.

I have a cart like this. It currently is in my garage but one year I posed with our turkey in it for Thanksgiving. I really should use it more. Great find

Good buy! I could find a use for one around here, but my husband is in decluttering mode right now.

Now that is a treasure I have never seen while pickin'!! How fun to have that. I wouldn't know what to do with it, but if I saw it I'd want it too. Great find!

I have a small vintage look shopping cart and I love changing up the decor in it. I bet you will have a ball decorating that cart.

Michelle, what a find! I have an old one that I got at a yard sale years ago. It's one that came from the little town market where we would walk to get our 5 cent butterfinger. I paid $5 for mine as well, but that was a long time ago. I've seen them for $100. It will be cute filled with fabric! Thanks for sharing with SYC.
hugs,
Jann