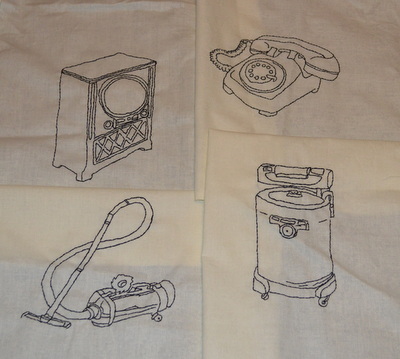 Apparently, the secret to productive embroidery time is to get up really early in the morning and start with the fiddly parts so that I can get through them before I fully realize what I'm doing. 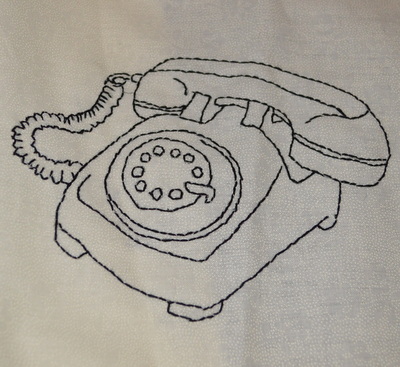 I got the cord of the telephone done.  We had a telephone similar to this one (ours had buttons, otherwise the shape and style were the same.) I had to give up on it when it stopped ringing, but while it worked it was my favorite phone ever. You could actually  hear it from across the house! That's why I replaced our cordless phone with the old one. My last cell phone had a ring tone that sounded just like it, which was wonderful unless I was watching old movies or Perry Mason reruns. 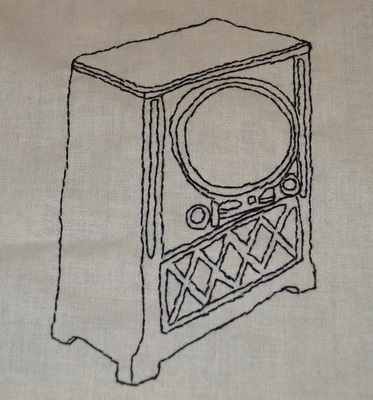 With this block, I started with the fiddly stuff -- the knobs and screen and speakers. The whole thing was done before I had a chance to get bored with it. This is the block that convinced me to buy the others. My family owned an appliance store when I was growing up and I love the look of old television sets -- although this one is way before my time.

Now that I've got all four blocks done, it's time to start piecing. I think I've got a good idea to tie it all together, if I can make the math work.

I'm linking up to Super Mom - No Cape!, Slow Sunday Stitching,
Posted by Michelle at 4:00 AM

Oh I love your black and white embroidered appliances! I guess I'll be showing my age when I say that I've used each of them. My grandmother had an old Hoover vacuum that looked a lot like that one. And my mom used a wringer washer right up until we got a new washer and dryer set in the late 70s. And one of those old rotary style phone sat on my desk of my first full time job after high school.

It's such fun that your family owned an appliance store. My parents owned a shop they called L&K Television. They sold tvs, radios, phones, plus more. I worked there part-time as a teen and also later as a adult for a short period of time when they needed extra help.

Thanks so much for linking up to this week's Stitchery Link Party and for the link back. Aloha hugs!

Oh and thanks for the trip down memory lane!

I love this blocks, they're just so quirky! It sounds like you've got the early morning's sussed too...I dread to think what any sewing of mine would look like before midday, haha! Have a great Sunday :)

Stitching is the perfect way yo start the day . I have used all of those appliances too

When you work on the fiddly parts first it makes the whole project go faster. Love those blocks.

Such great blocks! We had a phone just exactly like that one!

Oh, gosh...I must be an old fogy since I actually have actually used these old things! Cute, cute blocks.

Beautiful stitching. We had a telephone exacly as the one you stiched. See you next Slow Sunday Stitching.