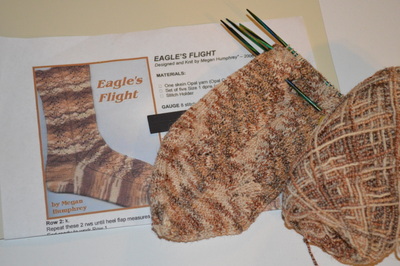 This project has been in my Ravelry queue since 2007. It's the name and the color of the yarn that sucked me in . I don't have any Opal Owl, but I do have two skeins of Patons Stretch Socks in Taffy. That's more than close enough to make me happy, especially since I like Stretch Socks even more than I like Opal.

I almost gave up when I printed out the pattern and realized that it wasn't in English, but then I found the link to the right translation. I had a second moment of doubt when there was no chart and that 16 stitch repeat looked daunting, but I plunged in (toe up instead of cuff down because I'm not a big enough fan of cuff down socks to cast on 64 stitches and plunge right into an unfamiliar written stitch pattern) and after a couple of repeats it was all making sense.

Along with the knitting, I've been reading.

Liz Kroft has been looking forward to her solo hike along the John Muir Trail. She wants to be alone with her troubled thoughts and hopes that the strenuous exercise and voluntary isolate will help her sort things out and make some tough decisions about her future. Her boyfriend, who is a much less experienced backpacker, refuses to be left behind. I've never wanted to go backpacking and The Middle of Somewhere by Sonja Yoerg has me convinced that, even without a pair of psychotic brothers involved, that's the right decision for me. I did enjoy the vicarious trip along the trail and found myself rooting  for Liz and Dante to work things out.

by Deanna Raybourn is the story of daring lepidopterist Veronica Speedwell who has just buried her spinster aunt and has plans to travel the world collecting exotic butterfly specimens. She's traveled alone before and is quite confident that she can handle anything. Those plans are shattered when she returns from the funeral to the small cottage she shared with her aunt and finds the aftermath of a burglary. A German Baron begs her to flee to London with him, insisting that she's in mortal danger. Assuming that at the very least she'll save herself the price of a train ticket, Veronica packs her belongings.  Shortly after he her in the care of Stoker, a cranky naturalist who lives in a warehouse surrounded by moldering specimens, the baron is murdered. If that sounds fast paced, it is, delightfully so. Veronica is a fabulous heroine and the chemistry between her and Stoker is wonderful. I can't wait to see what happens in the next book!

Disclosure -- the publishers provided me with ARCs.
Posted by Michelle at 4:00 AM

Hi Michelle! I like the camo look of the sock yarn.
I can tell you are a serious reader, too!
This is my first Yarn Along. VERY fun!

Interesting sock although toe-up is not my favorite. I just finished The Last Season by Eric Blehm, a true story of a Ranger who disappeared in the Sierras. Very interesting, especially if you've done any hiking in that area. (Or read a mystery about the JMT.)

Good for you to plunge on in. I think those problems may have put me off, although I do like toe up socks.