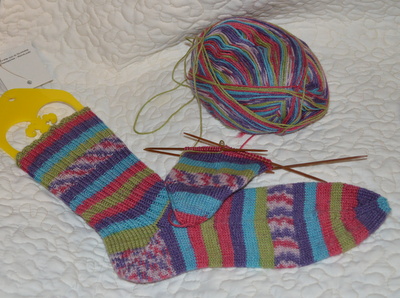 There's not much to show you this week except for the pretty colors. This is going to be my 18th or 19th pair of socks this year, depending on whether I finish it or the Eagle's Flight pair first.  It all depends on whether or not each day calls for mindless knitting or I can play with the feathery lace.

I've started work on the posts for the sock knitalong. You can find all of the details in this post.


And, as always, there are books to tell you about --

by Marko Hautala left me more confused than scared. Set in Finland, it's the story of Maisa, who has returned to her childhood home to research urban folklore and the legend of Granny Hatchet, and Samuel, who has come to make funeral arrangements for his father. I've been reading lots of books set in other countries lately, absorbing other places and cultures, but I just couldn't get into this one. I don't know much about Finland (or Somalis, or the different political parties) to begin with and the flashbacks didn't make it any easier to figure out what was going on. The story of Granny Hatchet and how it's told to the children by a masked figure in the "fairy-tale cellar" was seriously creepy, but once they left that tiny room and returned to the real world, the book lost me.

Where the Memories Lie

is the newest book by Sibel Hodge. (I read and posted about her book Look Behind You last spring.) When Olivia's father in law tells her that he killed and buried someone named Gertrude, Olivia is concerned enough to do some fact checking. The only Gertrude that Tom knew is alive and well and, with his advancing Alzheimer's, it's not uncommon for him to get confused and claim something from a movie or television show is part of his own life. But then Tom says that it's Katie who he buried and Olivia is afraid that she knows exactly who Katie is, her best friend who left home twenty five years earlier and was never heard from again. This was a fast paced read, dealing more with the way that various family members reacted to the murder than the murder itself. Until it came to a satisfying ending, it kept me wondering just what had happened.

This post is linked to Patchwork Times and Small Things. The publishers provided me with advance review copies of both books.
Posted by Michelle at 4:00 AM

I second that sentiment. Love the pattern your sock yarn is making.