For nine months, I've been afraid to plug in Grandma's sewing machine. What if it didn't work? I'd have been devastated and somehow it seemed better to keep not knowing than to find out for sure.  I had a suspicion that the last time the machine was used was when I sewed Alex's Teletubby costume. (There's the milk glass in the corner of the picture. I love how you can figure out whose house an old picture was in by the corners of the furniture.) 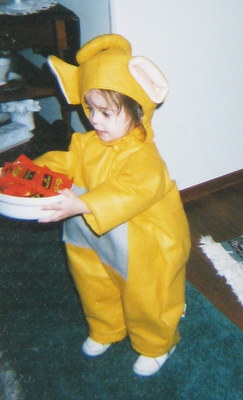 Once I opened up the  case and got a good look at the machine, I realized that I must've used the Huskystar that Grandma replaced this one with. (The Huskystar is here too, now in the custody of Teenage Daughter.) I thought this machine was the twin of the one I learned to sew on, but it's not exactly the same. 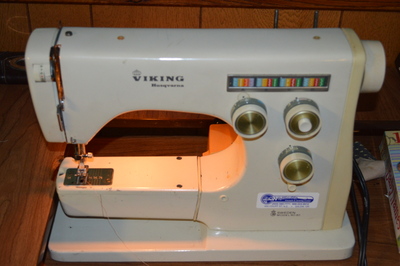 It sews! The tension isn't right, but all of the original manuals are in the case, so I'm sure I can figure that out. Along with how to get that awful repair sticker off of the front. Why do places feel like they can do that?

While I had my sewing machine table cleared off, I decided to take a deep breath and plug in the Singer 338 that I found last month.  At the risk of sounding disloyal to my grandma, I love this machine! 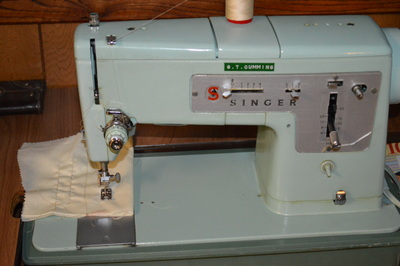 I've already gushed about the fact that it's such a pretty shade of blue, but even better than that, it sews! The tension is perfect. It was in reverse when I started, but I've got that figured out. This one gets to keep its sticker for as long as the adhesive lasts. I don't know who G. T. Cummins was, but this belonged to her.

What I'd like to do is sew at least one little project on every functioning machine in the house. Starting with the blue one, because it's blue and seems to be cooperative.
Posted by Michelle at 8:02 AM

You may have to get the Viking serviced to thoroughly clean the inside of old grease and/or sticky oil. I had a Model 6020 that sewed slower and slower. It turned out old grease had hardened. This can eventually seize the machine. The Bernina dealer in Provo did a great job. They told me if they could not clean it that I would not be charged. They were successfull and it cost $70.

My husband came home with an old (30's) Singer machine from an antique dealer. When I asked him if it worked he said he didn't know. So, I plugged it in and silence. Oh, boy, I was disappointed. But when I pressed the knee pedal it took off! It was so quiet we thought it wasn't working! Yay! Someone had taken care of it and it runs beautifully. It's as heavy as all get out but I love it.