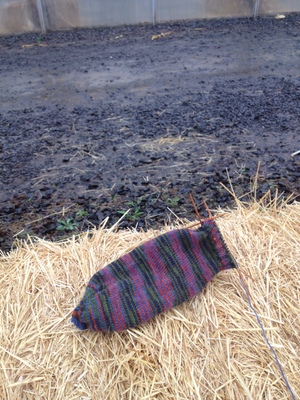 I'd hoped that this picture would show you how wet and rainy and cold it was at the pumpkin patch on Sunday. It doesn't even come close. I knew it was going to rain, but it was the last weekend of the season and I'd promised the boys, and the dark maze, which wasn't dark last year, is back to the way it should be. And, in all of the years we've been going, the rain always stops and we wind up putting our coats in the car.

In addition to not showing the rain, the picture really distorts the color of the sock. In real life, the stripes aren't nearly that dramatic and the colors are totally different.

Along with the knitting, there's been reading...

by Weny Corsi Staub really pulled me in. After the death of her husband, young widow Bella Jordan has packed up her young son and what few belongings she can fit into their car and set off for her mother-in-law's house. Engine trouble and a pregnant cat intervene and she winds up in Lily Dale, an odd little town where everyone seems to be psychic. Even Bella's son is making predictions -- he just knows that the cat will have seven (or maybe eight) kittens, and that his loose tooth won't come out until the fourth of July. Without a way to leave until the parts for her car come in, Bella finds herself taking care of the cat and kittens and helping to run the guest house owned by a woman who recently died. She doesn't feel that she can stay in Lily Dale, but she's in no hurry to move in with her husband's overbearing mother. I enjoyed this book, but the fact that it's written in present tense was sometimes jarring.

In Haunt Couture and Ghosts Galore

, the third Vintage Mystery by Rose Pressey, Cookie finds herself haunted by a second ghost, this one a failed PI who was separated from his favorite hat when it became evidence in a murder investigation. (Cookie has been haunted by socialite Charlotte Meadows ever since she bought the deceased woman's favorite clothing at her estate sale.) With the help of the two ghosts and her psychic cat, Cookie works to figure out the killer's identity. I like Cookie, but the two ghosts flirt like a couple of giddy teenagers and I kept wondering why, instead of waiting for the owner of the occult shop next door to come by, she didn't buy the cat its own ouija board.

The publishers provided me with ARCs. This post is linked to Patchwork Times and Yarn Along.
Posted by Michelle at 4:00 AM

We have your rain here today - coming down in buckets!! Lovely sock :-)